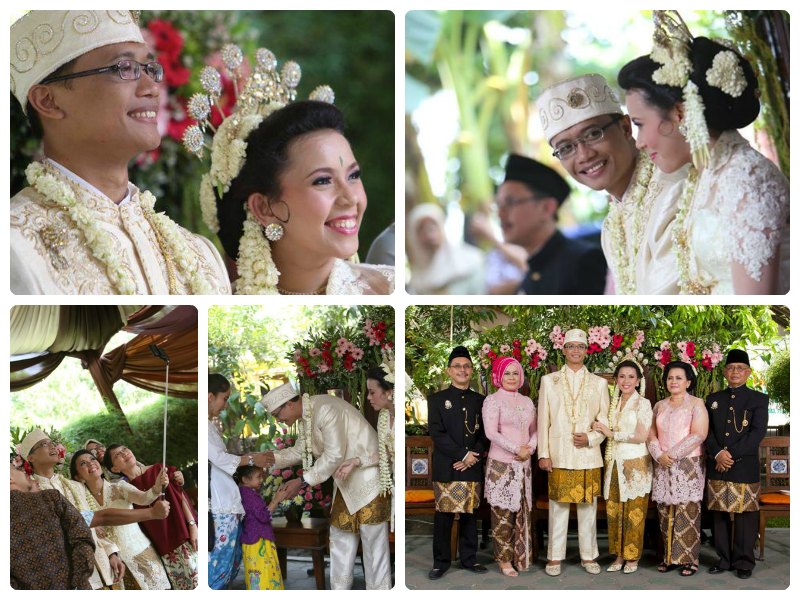 So yeah Yoga’s Catholic and I’m Islam. We’d been dating for five years before finally getting married, including three years of long distance relationship, which somehow we managed to endure. What would it mean if we were not meant to be? Hehe. Theological debates and family controversies aside, we decided to have both Catholic matrimony and Islamic matrimony. Because one matrimony is too mainstream, perhaps? 😀

The Catholic matrimony (top), and the Islamic one (bottom).

Next is about the tribes and traditions. Yoga’s family is Javanese, although he’s born in Jakarta and less fluent in speaking Javanese than I do (because I was raised in Yogyakarta, the so-called epicenter of Javanese tradition). Meanwhile, I’m a mix of Sundanese from Ibu (Mom) and Minang from Ayah (Dad). I can’t claim that I’m Minang, though, since Minang is a uniquely matrilineal culture: family line, land, and property is passed down from mother to daughter. However, I can claim that I’m Sundanese because it counts the family in both the male and female lines.

In most cases I prefer to define myself as an Indonesian, but it does not work that way in marriages in this part of the world, because marriage attires are defined by the tribes of the bride and groom ^^;. In both Javanese and Sundanese traditions, the wedding is usually hosted by the bride’s family. Therefore we donned the Sundanese attire for the wedding, albeit for the unusual touch of both Western outfit — the men in the Catholic matrimony wore suits — and Minang attire for the men in the Islamic matrimony (peci, shirt, jacket, and sarong). The mothers didn’t change their costume all day long because it was troublesome, really, with all that bustiers and batik cloth and tight kebaya. I would love to choose not change my costume as well, but since it was my time to shine (ha!), I changed my kebaya from white to a cream-coloured one for reception.

For me, the whole process of make up and wearing the Sundanese attire took more than three full hours. I woke up at 3.30 am and the make up artist started to transform/torture me at 4 am. I was so sleepy I couldn’t reject her forcing two fake eyelashes on my upper eyelid (I have a thing against fake eyelashes — they make my eyes so heavy and WHY ON EARTH people can’t just appreciate real eyelashes? Argh). At 7.15 I was ready and we went to the chapel. 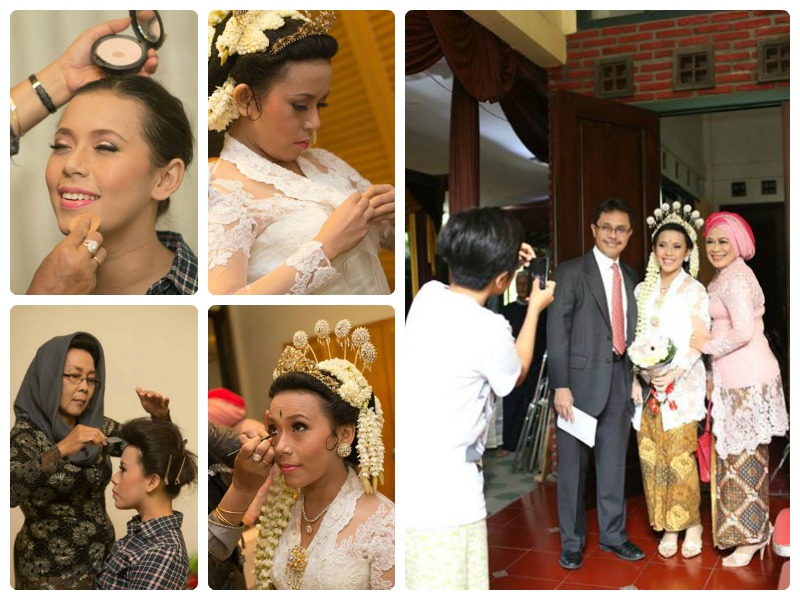 Three hours of make up and hairdo and finally ready to go.

Then we went back to my parents’ house to do the Islamic matrimony. continued with some Sundanese ceremony. From an extensive list of Sundanese marriage rites, we only chose the sungkem (asking for the parents’ blessings) and saweran — when an elder gave us some advice on how to live a life as a couple, then my parents threw money, candies, and rice to the guests. Money mean wealth, rice means prosperity, candy means the sweetness of life. Guests would then try to catch the coins and candies. Saweran is the most exciting part in Sundanese wedding, I must say, compared with siraman (when the bride and groom are bathed with flower water), nincak endog (when the groom steps on an egg then the bride washes his feet as a symbol of devotion — you know there is no way I would do that anyway hahaha), etc. 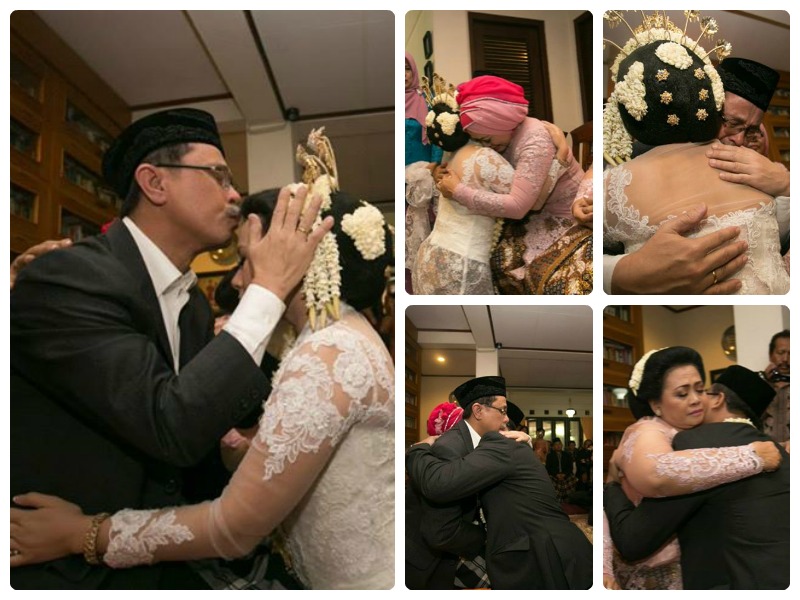 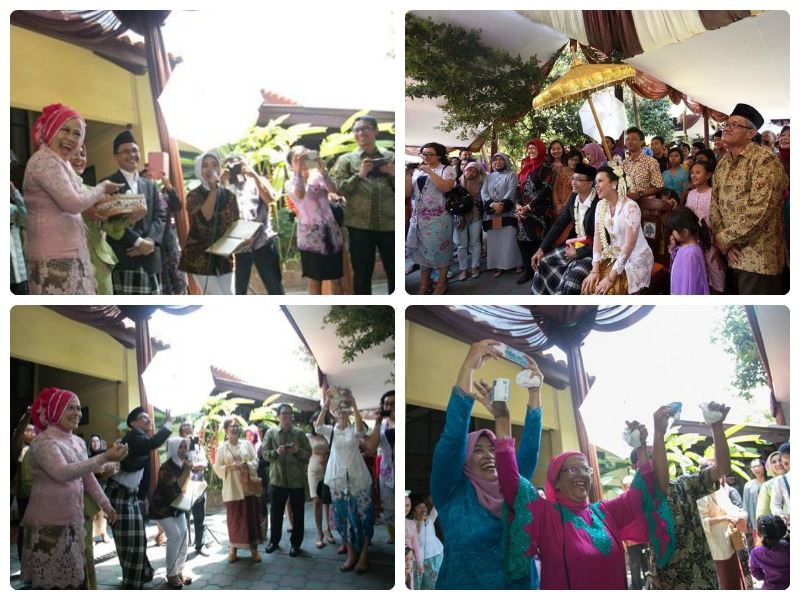 We were blessed with the steady stream of family, friends, and neighbours, shaking our hands, kissing our cheeks, wishing the best for us. We wished we could invite and see all of you, of course, but the reception was a small one with the closest kin and neighbours 🙂

As for different cities… my family’s homebase is in Yogyakarta, while Yoga’s is in Jakarta. It means that friends and family from Yoga’s side might not be able to go to Yogyakarta, which is an hour away by plane or eight hours away by train. The solution: we had two receptions. *sigh* Four weeks after the wedding in Yogyakarta, we had another reception in Yoga’s house in Jakarta. In Javanese tradition it is called ngunduh mantu: when the groom’s family host a reception to introduce their new in-laws. This time, we donned Javanese attire from the morning (I started the make up session at 7 am) until the afternoon (I finally took off all the costume at 4.30 pm). 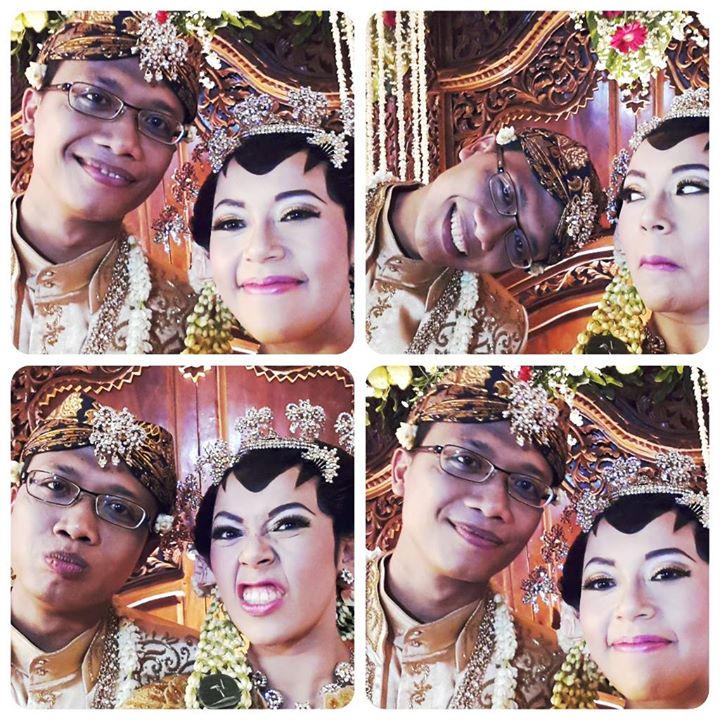 We felt exhausted at the end of the day but happy that finally all the matrimonies and ceremonies were over. Cheers for a happy life in the future! 🙂