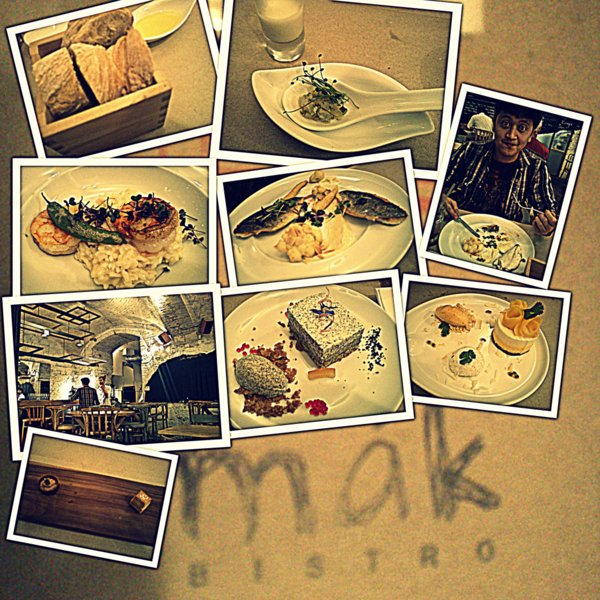 I consider myself lucky to have a cousin who comes to Budapest every Tuesday.

Galih is currently a cook in one of river cruise ships which travel the Danube river every week, from Passau, passing Bratislava, Vienna, Budapest, and some other cities I forgot the name of, and back to Passau. Previously when I still lived in The Hague, he worked in a cruise ship which docked in Rotterdam — a city 15 minutes away by train from The Hague — and we tried to arrange meetings, but it never happened.

Anyway, when you live abroad and almost no one speaks your language, it’s really nice to meet your family once a week. Last week we met and we talked about many things in my apartment — I haven’t seen him for almost two years, I think. Last Tuesday, we met again and dined in one of the best restaurants in Budapest: Mak Bistro.

The restaurant is just about two minutes of walk from CEU. I like the interior of the place — some say it’s modern industrial but it’s like in a high-ceilinged underground cellar. Jazzy tunes and rustic wooden tables and chairs complements the vibe. It is one of the few restaurants which are recommended by Michelin guide. The price is more expensive than my daily student food budget, but they offer more affordable lunch menu as well — 2 courses for 2,800 forint (10 euro) and 3 courses for 3,500 forint (12 euro).

While waiting for Galih, I ordered plum spritzer (soda with plum syrup, which is nice) plus bread and olive oil. The bread is fresh and tastes good. When Galih came — after being tricked by a taxi driver who brought him via the wrong streets to get a hefty 40 euro, he ordered aranydurbincs mandulás brokkolival és bébi kukoricával (sea bream with almond, broccoli and baby corn), while I asked for garnélás rizottó (risotto with prawns). Don’t ask me how to pronounce the Hungarian words.

When we started to catch up the happenings of the past week, the goodlooking and very jolly waiter came to give amuse-bouche — fancy bite-sized starters. Galih analysed the whole content of the prawn chop on the spoon and the cold soup. “Dill, sprouts, boiled prawn… no salt and pepper,” he said after munching the prawn. For me, the cold soup tasted like a much-better version of ajoblanco (white gazpacho) I tried in Granada last year.

Galih’s sea bream seemed and tasted really nice (I tried it too). There were two fillets, each with one crispy side and well-cooked delicate texture in the other side. My risotto was creamy, the prawns are big and juicy, with a nicely put grilled green chilli to add some spice. The portions are on the small side, but perfectly enough for our small stomachs.

Then we asked for both desserts Mak provided that day: mangós-kókuszos desszert trópusi gyümölcs sorbet-val (mango-coconut dessert with tropical fruit sorbet) and mákos kocka mákfagylalttal (poppy seed square with poppy seed ice cream). Both were really delicious. Apparently the latter is the namesake of the bistro, as ‘mak’ means poppy. As a bonus, after Galih paid the bill, we got cheese biscuit — tasted like kastengel, the biscuit we’ve always had for Idul Fitri at home — and chocolate mousse. Yum.

The night was somehow like a mix of Born To Cook (Mister Ajikko) anime and MasterChef. In between analysing the food, Galih also talked about methods of cooking, ingredients, food recipes, and above all: his aspiration to have his own restaurant. A small, intimate restaurant with just a few dishes but made with heart and perfection. I really wish he will succeed to do so!