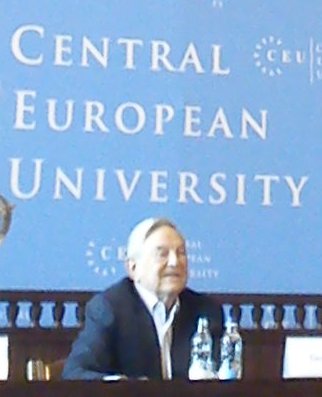 Meet Mr. Soros. Yes, the George Soros, the financier who becomes wealthy for speculating and other financial acrobatics, the founder of Open Society Institute (now Open Society Foundations), who gave US$ 800 million endowment for Central European University. He is currently the Life-CEU Trustee and Honorary Chairman of the Board, so yesterday he came to CEU to give a speech in the academic year opening ceremony. Usually he only comes to the closing ceremony, so it was the first time for him, in 21 years of CEU, to speak at the opening ceremony.

I’ve got mixed feelings about the guy. The epitome of neoliberal ideas and agendas, he is the one who’s usually blamed for the 1997-1998 Asian crisis, which tore down the Indonesian economy as well. But had there been no such crisis, perhaps Soeharto would not step down from his 32-years dictatorship. The economy meltdown was one of the triggers of the 1998 reformation, starting a long and painful process of democratisation, which some argue that it’s hijacked by a mix of old and new powerful people — but that will be another topic to discuss about 🙂

Anyway, the opening ceremony was held at the grand Magyar Tudomanyos Akademia (Hungarian Academy of Sciences) building, about three minutes of walk from CEU. I was wearing my jeans but lots of people wore dresses and suits — I had no idea that it’d be that formal, guess I’m still in ISS casual mode, hahaha.

Soros sat on the stage, with other speakers, and boy, he is… old. He is 82, after all. White hair, dark suit, and slow talk.

He spoke about going back to school, to study philosophy of social science in CEU. He said he wanted to build an economic theory, of which he’d developed the conceptual frameworks of fallibility and reflexivity. Human beings are bound with uncertainties, thus difficult to predict — economy as a science has shortcomings in explaining and predicting people’s decisions, hence it failed to deal with the last great economic crisis… well, I must say there’s nothing really new in what he’s saying in his perspective.

However I am amazed of his willingness to be back in the classroom in such old age (which made me wrote a short news about it here). I don’t know exactly what courses he will take and whether it’s in the master studies curriculum or PhD, as he did not specify on it. But still, perhaps one day, I’ll see him in CEU buildings.

One last note: sorry for the awful quality of the picture, I did not bring my camera so it was taken with my phone.