A Great Day… Not.

This was my plan:

Attend the morning class, go to Amsterdam to interview a world-class lawyer from Bohler, stroll the metropolitan in the afternoon, perhaps shop a lil bit since it’s discount-weekend in The Netherlands.

And this is the reality, fitting too much into the so-called “Murphy’s Law” — when everything that can be wrong, goes definitely wrong:

Woke up late. Had no breakfast. My morning class at ISS ended not as fast as I predicted, which made me missed the Sneltrain train I planned to take from The Hague to Amsterdam. So I had to take another train and change once in Leiden.

About 20 minutes later I arrived at Amsterdam, the city that once I visited 13 years ago. But after I got off the tram 1 in Keizersgracht, it was already 12.30, and I just realized that I forgot to bring my notebook — in which I jotted down Bohler office’s address.

As far as I remember, the office’s number should be 60. It took me about 20 minutes to walk to number 60, which was, damn! not the right office. I knocked down another lawyer’s office, whose assistant was kind enough to search the right address in the directory.

She told me the number was actually 560, shit, 560! not 60, and gave me Bohler’s phone number. I phoned the number but then in the middle of the conversation it went off — my phone was running out of credits.

I arrived at the office terribly late, at 13.20. The office was actually just 10-minutes walk away from the tram stop.

The person I wanted to interview, of course, has gone to another appointment, and could not see me for the rest of the day. After leaving my namecard at the receptionist, I went out. 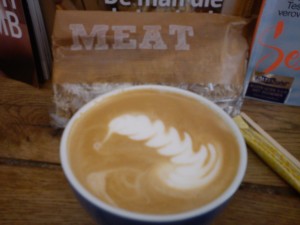 I sat by the canal, didn’t know and didn’t care which one, and wept. Nothing romantic or thoughtful like Coelho’s Pilar who sat by the river Piedra. I was so sad and angry towards myself, who made totally stupid mistakes for the whole day. Being late in a one-on-one interview is like one of the worst, humiliating sin in a journalist’s life. I was frustrated. Add a dash of emotional unstability during my period, and it became even worse.

I lost the appetite to take a walk around Amsterdam. After a quick overpriced sandwich and coffee, I went back to The Hague. See, when food couldn’t make me feel better, the problem is that bad. *sigh*