Beyond The Peace Day 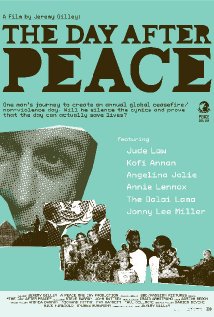 Today’s the international Day of Peace. Do you know it?

I’ve heard about it just once, when I visited a peace bell in Quezon City, Philippines. I had totally forgotten about the Peace Day until I watched a documentary, titled “The Day After Peace” in United Network of Young Peacebuilders‘ office yesterday.

The movie is about Jeremy Gilles, a filmmaker and founder of Peace One Day, who’s determined (if not obsessed) to make a fixed date of Peace Day, and to ensure that it’s truly observed as a day without war, a day of global ceasefire. In 2001, he succeeded pushing the United Nations General Assembly to finally have a resolution which made September 21st the annual Peace Day. Actually the Day had always been there in the first place, declared in 1981 to be occurred in the third Tuesday of September.

The previous UN Secretary General Kofi Annan was supposed to announce the new resolution of Peace Day in UN’s head quarter in September 11th, 2001. But here comes an irony: the US was attacked. So the announcement was cancelled.

Gilles then desperately tried to make the world notice that there is an international Peace Day. It’s hard, it’s even harder to convince people that it’s possible, but the most difficult thing is to make war stop for just one day.

The documentary follows his efforts to make it possible. Along the way we see how important it is to bring celebrities (eg. Angelina Jolie, Jude Law, Annie Lennox) to the campaign, to take money from multi-national companies to fund it (ha!), and to never lose hope.

It’s an interesting show on how Gilles tried to reach his dream. Self-centered, of course, but he chose interesting dialogues (with celebrities, government officials, UN officials, and last but not least people in conflict zone) to support the documentary. Although there are weak spots that should be cut in his editing room.

Gilles picked Afghanistan’s successful Peace Day to end the movie. But no, there’s no global truce yet. We still have to work it out…

The movie poster is from here.