I spent the Easter Break as a hostess for fellow Indo-Mundusians (= Indonesians who also get the Erasmus Mundus scholarships). First came Ana from Prague, then Agis who’s also studying in the same program.

On Friday, we went to Amsterdam then joined one of Sandeman’s “free” tours. Ged was our tour guide and he’s good, taking us to mostly the same route with my first one: red light district, Oude Kerk, De Waag, Begijnhof, China town, Multatuli statue, free cheese from Reypenaer, and Homomonument. The topic was also the same: what’s more important to Amsterdamers, tolerance or money? The different parts of the tours was that Ged took us to (evil) VOC’s headquarter and spinhuis, the women’s detention centre a.k.a spin house. 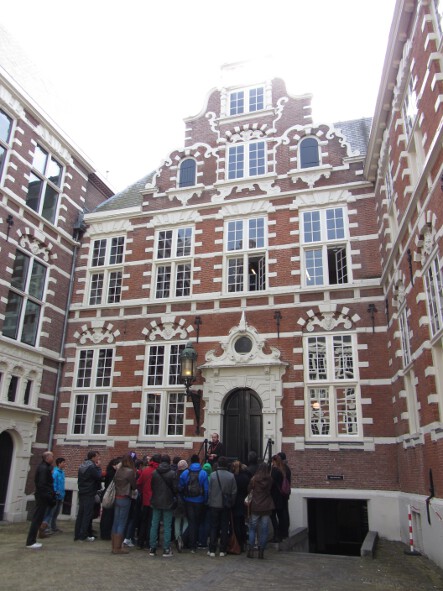 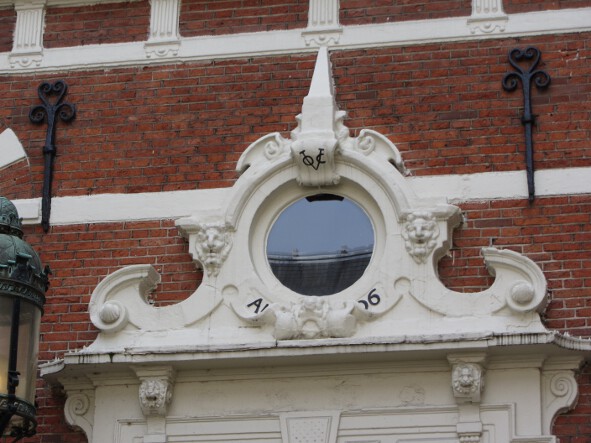 The VOC HQ now is used by University of Amsterdam. FYI, VOC is the world’s first company to sell it shares — to finance its Asian expedition — in the world’s first stock exchange in Amsterdam. VOC is also considered the world’s first multi-national company, which then colonised what is now called Indonesia. The Dutch were (and perhaps still are) really good businessmen, at the expense of Indonesians who became their subjects, of course. 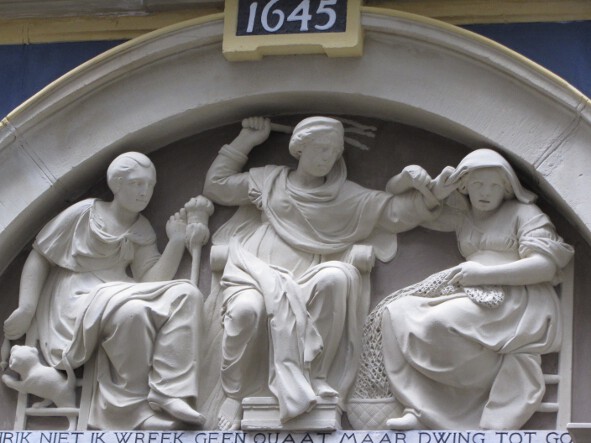 The next day was a truly flowery day as we went to Keukenhof. We met with more Indo-Mundusians in Schiphol and in Keukenhof — Ira, who studies in Gottingen, Abdullah (Karlsruhe), Inez (Hamburg), Riyandi (Delft), Della (Brussels), and Sandy (Mulhouse) who brought along her cousin whose name is also Bunga and her friend Dwi (Bethune). The ticket to Keukenhof, including a return bus ticket from Schiphol or Leiden, cost us 21 euro. I think I had some kind of flower overdose there — it was really nice despite the fact that some tulip bulbs had not bloomed yet. 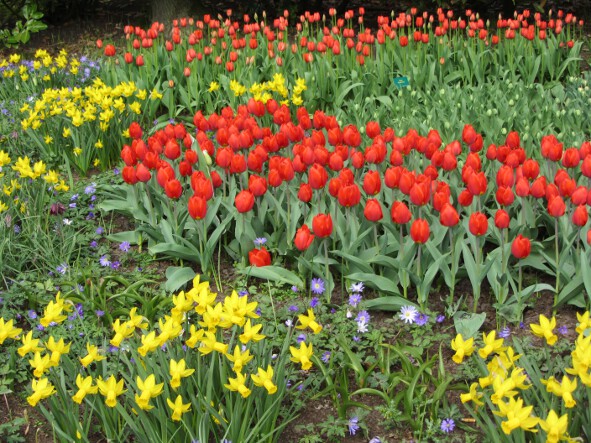 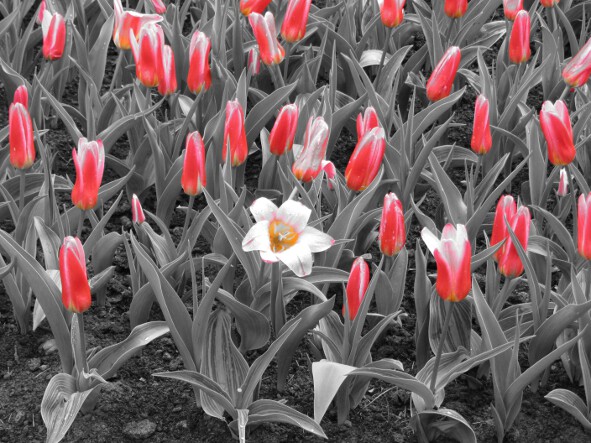 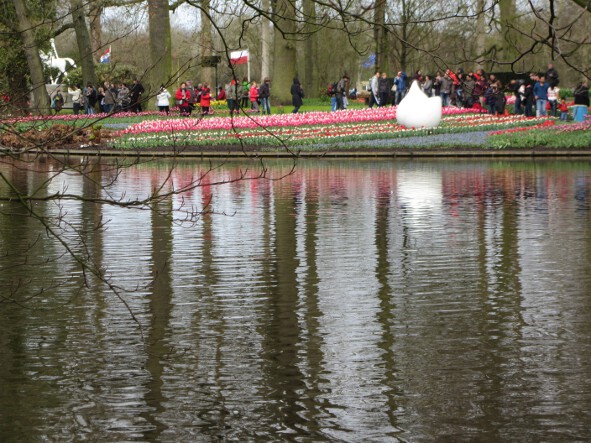 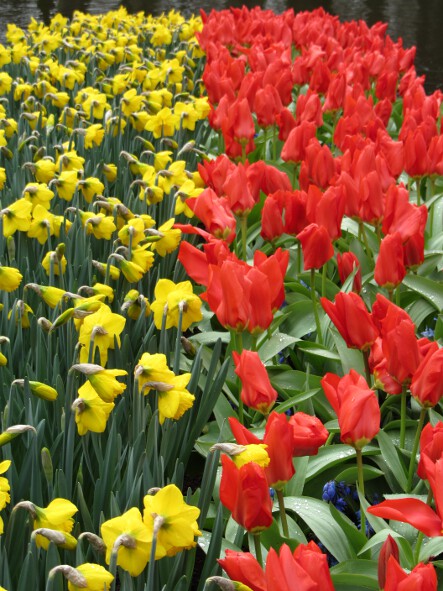 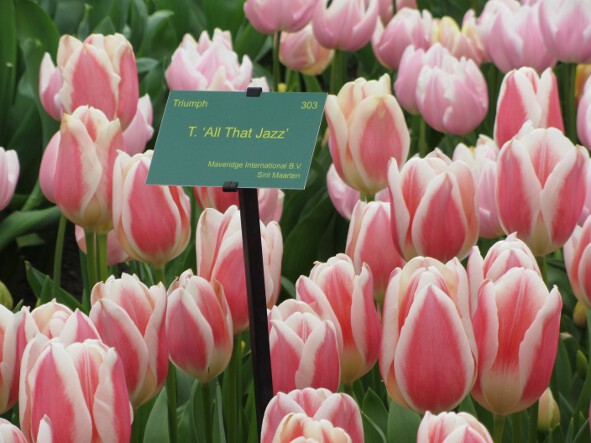 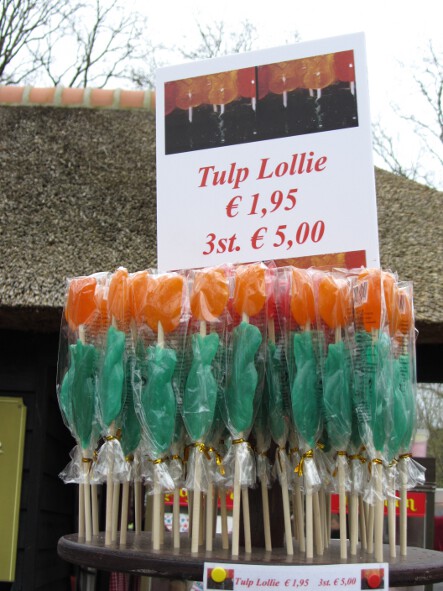 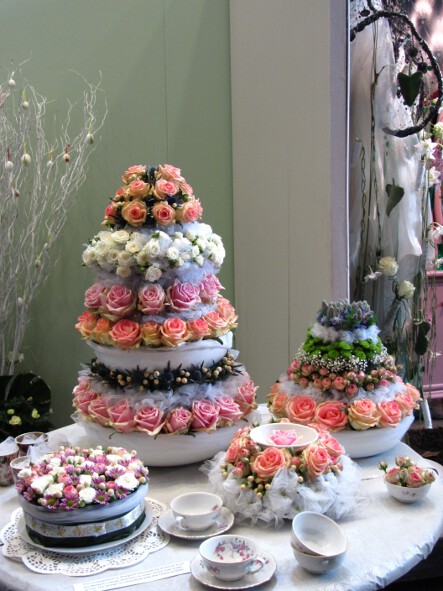 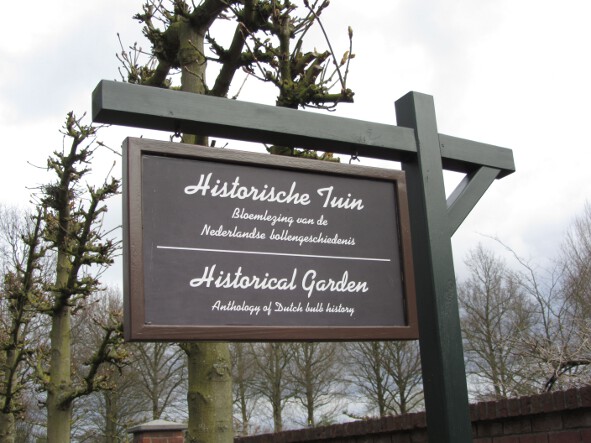 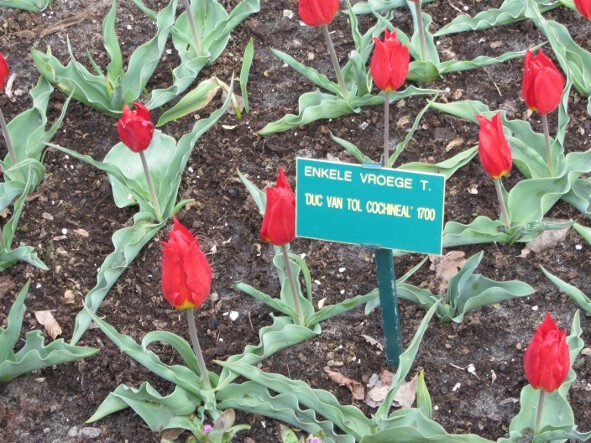 The other — younger, taller — Bunga’s aunt gave Sandy hearthy portion of food supplies. We were too keen to eat it we didn’t wait until we arrive at a perfect picnic spot near the windmill. Hehe.

That night, with Ira, Agis, and Abdullah, I walked through several very crowded alleys of the red light district. Well it’s Easter Break so Amsterdam is crazily full of tourists :/ We didn’t take any picture there, of course. We don’t want our cameras to end up thrown into the canals, do we?

The following day was spent in Volendam, a tourist-trap fishing village 20 kms north of Amsterdam. Again, SO MANY PEOPLE were there as it was the Easter Break. I even met Azis, a high school friend there! Hahaha. That was so funny, going so faraway from home yet meeting some old friend.

We bought a 10 euro EBS bus ticket which allow us to travel as much as we want to the Waterland (Volendam, Edam, Purmerend and its surrounding) in a day. The bus from Amsterdam to Volendam took about 40 minutes. Souvenir shops there are much cheaper than the ones in Amsterdam and Keukenhof, so note that if you want to shop for things to bring home.

We took a photo session wearing Dutch traditional costume in Fotograaf, which was slightly pricier than other photo studio (9 euro for postcard print while others were about 7.5 euro) but allow visitors to take pictures in their studio. This is the same studio which took pictures of at least two Indonesian presidents, Megawati and Gus Dur. Somehow, Indonesians love Volendam, perhaps it’s some sort of mental inlander alias the “colonised mentality”. 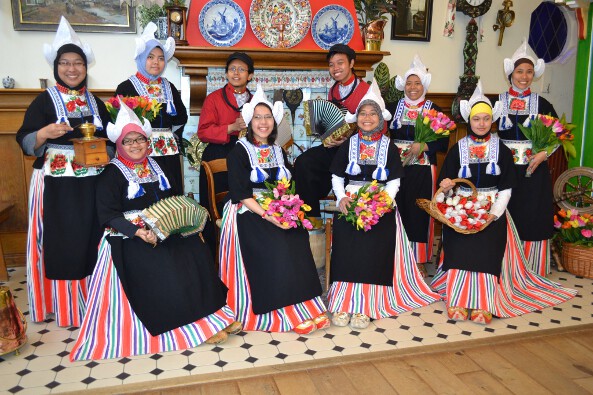 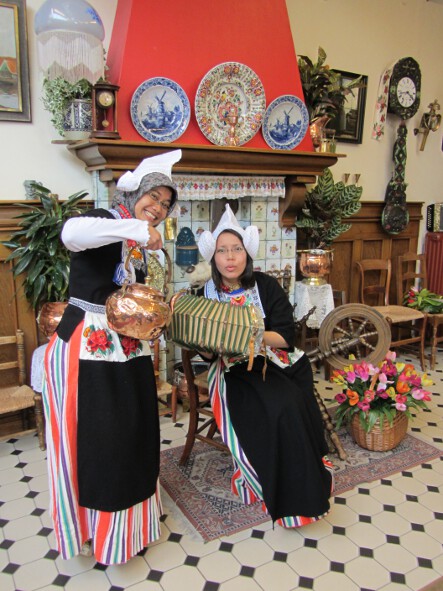 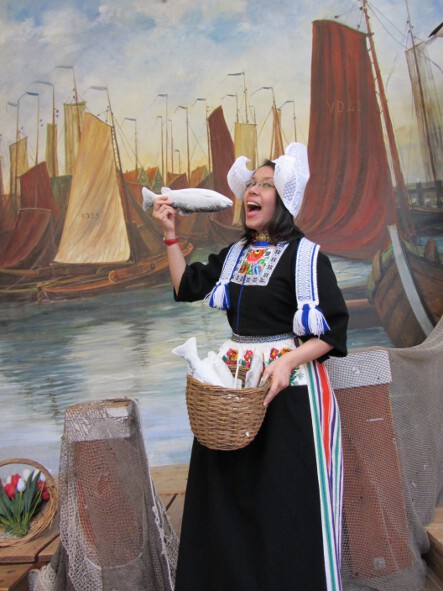 I also visited the Volendam Museum, which was not a part of Museumkaart network so I had to pay 3 euro. The museum’s small, filled with mannequins re-enacting Volendamers, which are a bit scary hahaha. 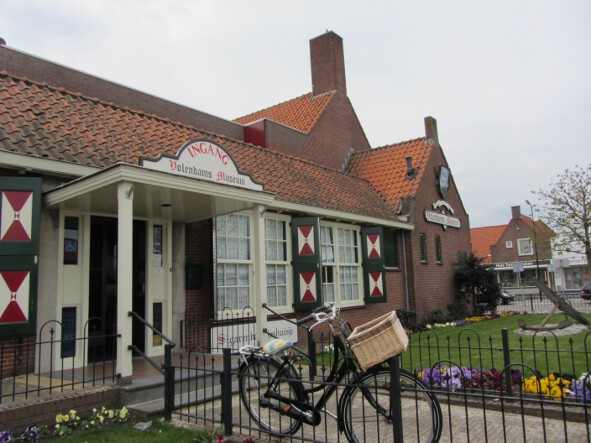 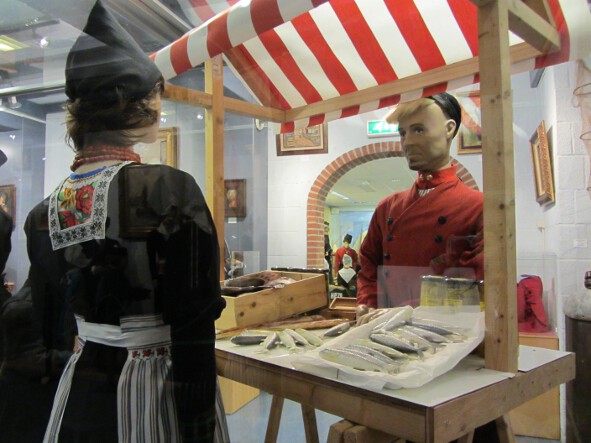 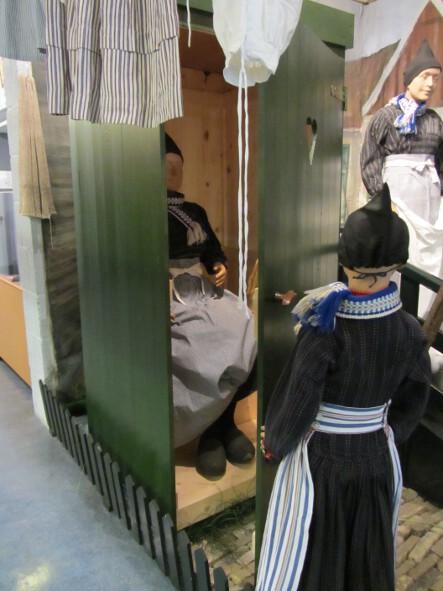 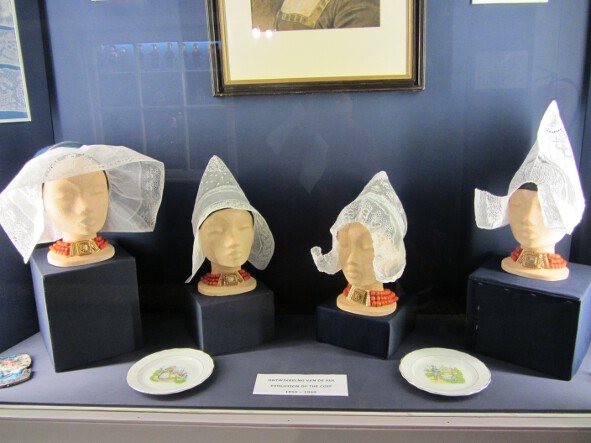 The caps through the ages

Then we went to Edam, a neighbouring town for less than half hour bus ride. It was so quiet since it was Maundy Thursday. We strolled for a while then took another bus ride back to Amsterdam.

We spent another night in Amsterdam. I spent the last day queuing to get in the Anne Frank House (going in holiday is totally not recommended! you can also buy the tickets online, btw) while Ira, Sandy, and Abdullah went for their last walk in the city. Later we went to separate ways — only Ira accompanied me back to The Hague and spent two more nights in the city.

The five hectic days were really fun, although a bit exhaustive… 🙂