Ok, so two weeks ago I got to get my graduation ceremony. It’s like a HUGE reminder that after almost two years of hard work, the whole drama is finally over… or, unfortunately… not yet. 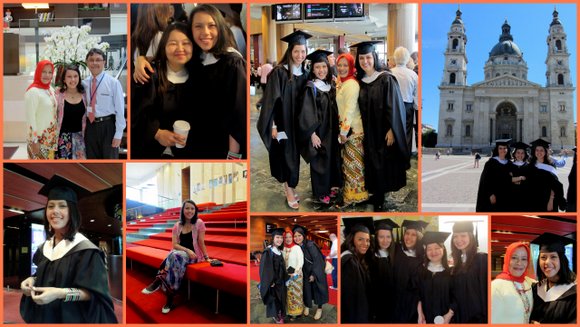 With caps and gowns and almost every amazing people possible

Here’s the thing. For CEU‘s Department of Public Policy (DPP), my thesis deadline was June 7th (although for some procrastination reasons I submitted mine kinda late). But the graduation ceremony was held merely a week later on June 13th. It means that the thesis wouldn’t be graded yet (professors are not super-people who can read and grade several thesis in 5 days, of course). The promise was to get the thesis grade in six weeks after submission date, so we the students are actually still “graduate candidates” instead of “graduates”.

The second reason that school’s such an unfinished business is the Policy Lab. What creature is that? Well, it’s like a ghost which has been haunting us, wonderful procrastinators, for months. Public Policy students could choose between internships or Policy Lab projects, which was defined as groups of students acting as consultants for NGOs’ policy-related projects. Being someone who just wanted all academic burden to be over as soon as possible (two whole years sounded really not promising for me), I chose Policy Lab. But the project simply becomes dragging us over and over, for various reasons. Anyway, it’s supposed to end on June 30th but my group is getting a few days of extension.

Outside school stuffs, GYAC’s transition “out of World Bank Institute tutelage” is also another unfinished business. The business model review takes plenty of time and needs lots of stamina of reading more and more documents. I really hope it will end well, becoming a new, solid start for the network of amazing youths across the globe.

On top of that, I’ve been traveling since June 19th. Due to budget restriction and sad news of Hungarian consulate’s decision to reject Yoga‘s visa application, I cut my dream Balkan trip into a very short version. Originally I want to go from Budapest to Croatia (Zagreb, Split, Dubrovnik), Bosnia and Herzegovina (Mostar, Sarajevo), Kosovo (Pristina), Macedonia (Skopje), until Greece (Thessaloniki and Athens). But well, reality hits, so I decided to stop at Sarajevo instead before going back to Zagreb then Budapest. (Currently I’ve reached Mostar and there will be plenty of blogposts about this trip, but well you’ll have to wait for them…)

In a nutshell, yes, I’ve gone through the graduation ceremony, but there are lots of loose ends of which I need to take care of before going back home and facing the real world once again.