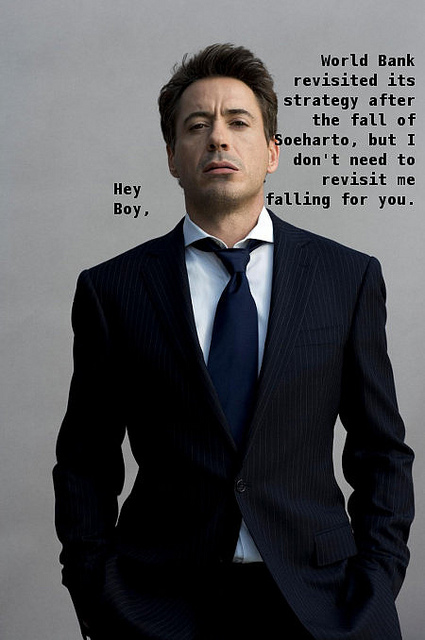 It started when a friend told us about the internet meme blogs of Ryan Gosling… juxtaposing pictures of Gosling with feminist and development studies quotes-slash-pick-up-lines. The combinations of pin-up images and quotes are totally catchy and amusing, like this one: It’s just that I don’t really like reading the “hey girl” line, because I don’t want to be the one told that smart pick up line and gazed by Gosling, I want to be the one who is telling it and gazing on the boy. So while video-chatting with Yoga as well as procrastinating on a reading, I came up with “hey boy” lines… related with random stuffs I’ve learned (albeit a bit on the surface, hehehe) here in ISS.

I posted my first pick-up line on twitter: “hey boy, good governance might be just a construction, but I don’t mind you good-governing my heart.”

Then I made the second, third, fourth pick-up lines and so on and so forth, it was so fun! Never know that making such lines can be that addictive! Now let’s try to put them next to some delicious guys who are not Gosling (I don’t really like him): I really enjoy making the pick-up lines.. Perhaps next time gonna do it again 😀