Homage To The Left

History is owned by the winners and its evidence is clear in Berlin and its guidebooks: the Eastern part of the city is framed as the grey, gloomy, and monuments of the fall of the leftists. At least that’s what Tripadvisor’s city guide apps says about the statue of Karl Marx and Friedrich Engels near the Museum Insel: ‘it represents the failures of communism.’ 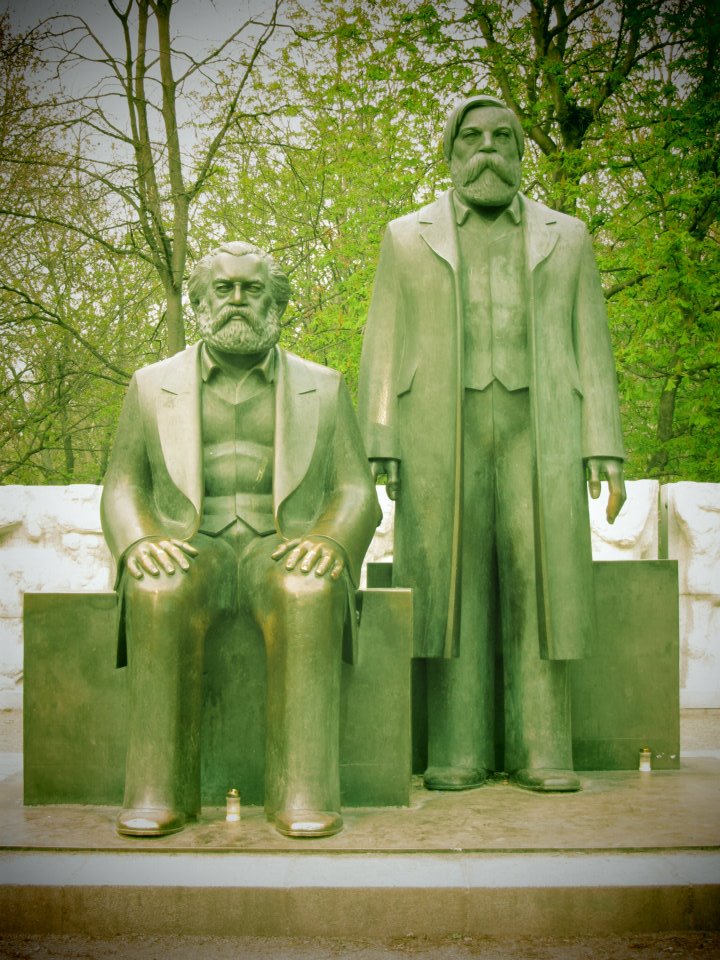 Thick moustaches and beards they have, no? Upon seeing the massive statues, I remember what one lecturer told the economy class in my first term: that Marx is actually a genius who understands capitalism inside-out and pours it into Das Kapital; that if you want to be a successful capitalist, you should read that book or at least understand its principles.

I’m always somewhat interested into East bloc’s history because it’s so different yet so similar to Indonesia’s story in the Cold War period (will blog about it sometime…). Anyway, the next day, I decided to stroll along the Karl-Marx Allee and Rosa-Luxemburg Platz to see some remnants of communism in the city. Information about the buildings in this post is mostly from the Wikipedia entry on the avenue (this is not an academic writing so I suppose there’ll be no harm on using Wikipedia, hahaha) and from TripAdvisor’s apps. 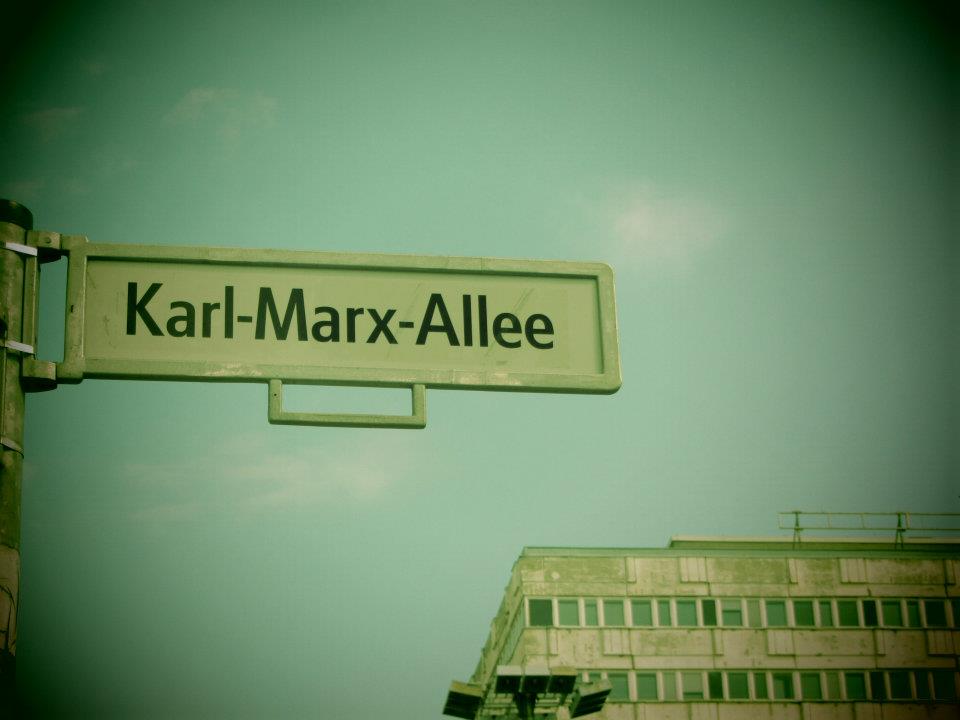 Karl-Marx-Allee is a monumental socialist boulevard built by East Germany between 1952 and 1960 in Berlin Friedrichshain and Mitte. It was a flagship building project of East Germany’s reconstruction programme after World War II. Before the war, the street was known as Große Frankfurter Straße. Then it was named Stalinallee between 1949 and 1961, but de-Stalinisation led the officials to change the name into Karl-Marx Allee. 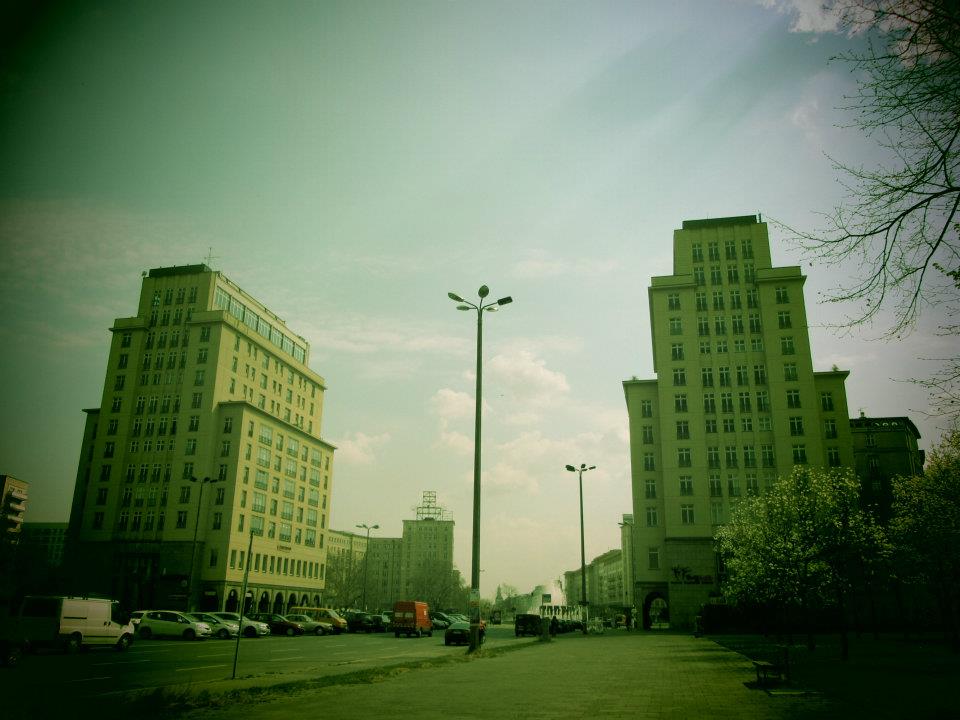 The avenue, which is 89 m wide and nearly 2 km long, is lined with monumental eight-storey buildings designed in the so-called wedding-cake style, the socialist classicism of the Soviet Union. It was designed by the architects Hermann Henselmann, Hartmann, Hopp, Leucht, Paulick and Souradny to contain spacious and luxurious apartments for plain workers, as well as shops, restaurants, cafés, a tourist hotel and a cinema.

It was built by volunteers, common Berliners. I found this picture, from one of the boards along the avenue which explain the history of the Allee, to be interesting: 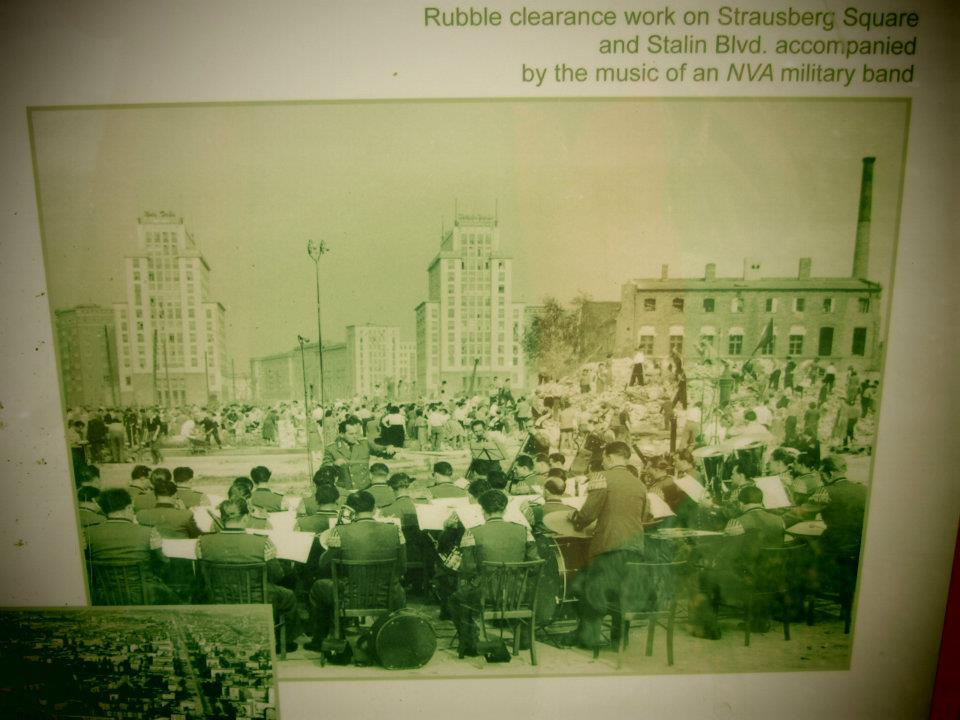 Rubble-clearing accompanied by music from a military band. Epic.

At the start of the stroll, I saw the mosaic from the Haus des Lehrers (House of Teachers) building, right at the western end of the avenue. It housed the education union. 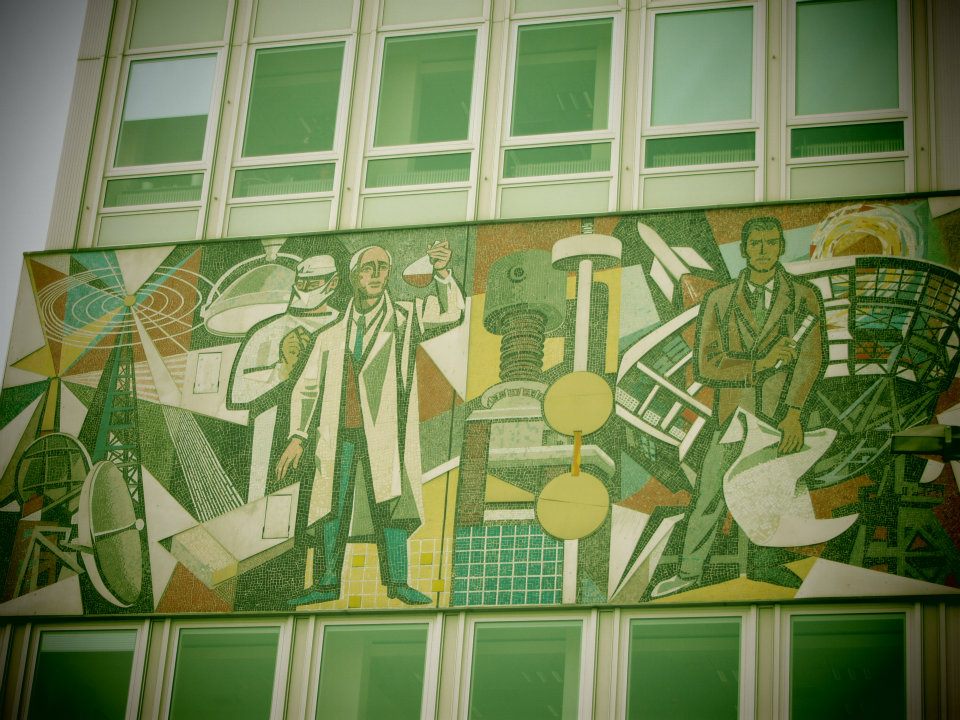 Next on the left side is Kino International, built by Josef Kaiser in 1963, which hosted premieres of movies of the East German Film Production. Too bad I didn’t know its side was beautiful, so I only took the picture from across the street. 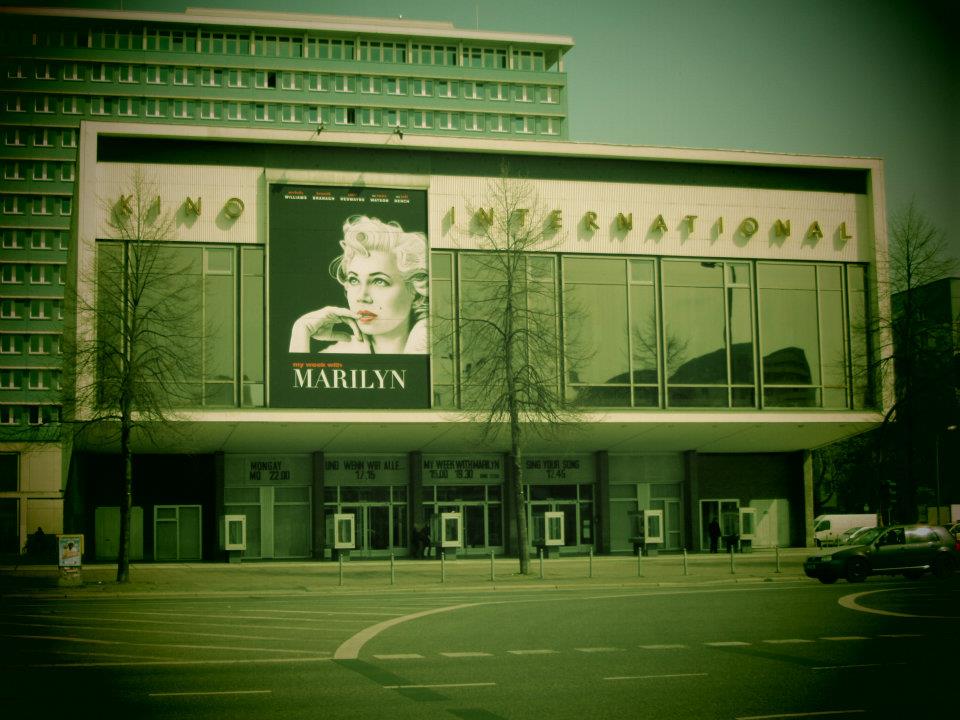 Right across the cinema is Cafe Moskau, East Germany’s biggest cafe and restaurant. It is now a business conference center (sounds lame). 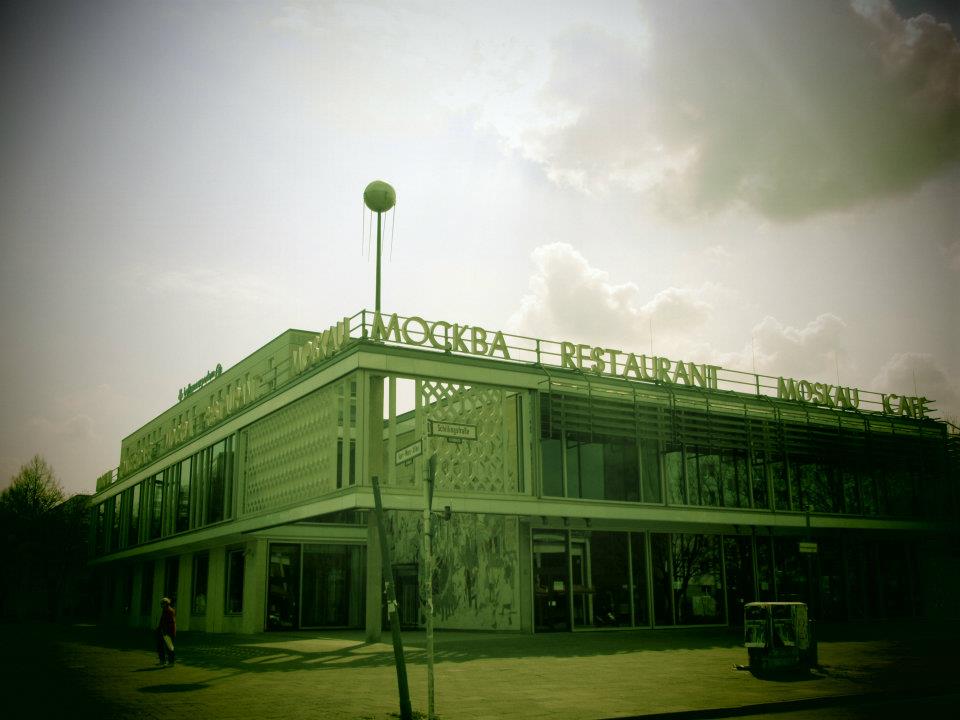 At the entrance is another mosaic, titled ‘From the Life of the People of the Soviet Union’ (ha!) by Bert Heller. On the upper left corner is the Soviet Union’s Sputnik, the first artificial satellite to be put into Earth’s orbit. 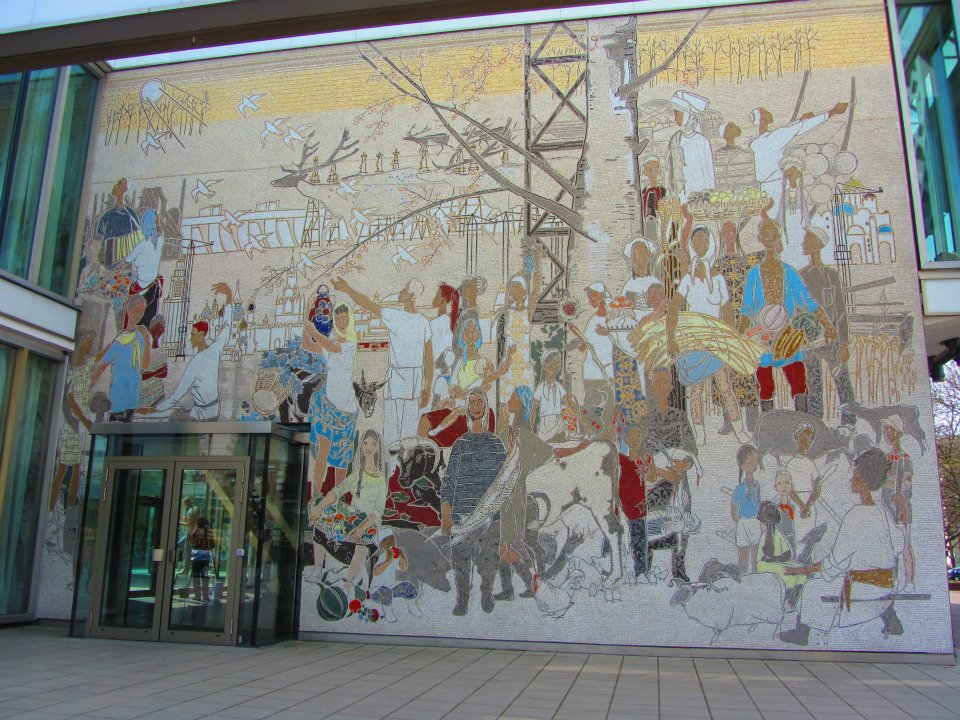 Next is the Floating Ring Fountain at the intersection of the Allee with Straussberger Platz. 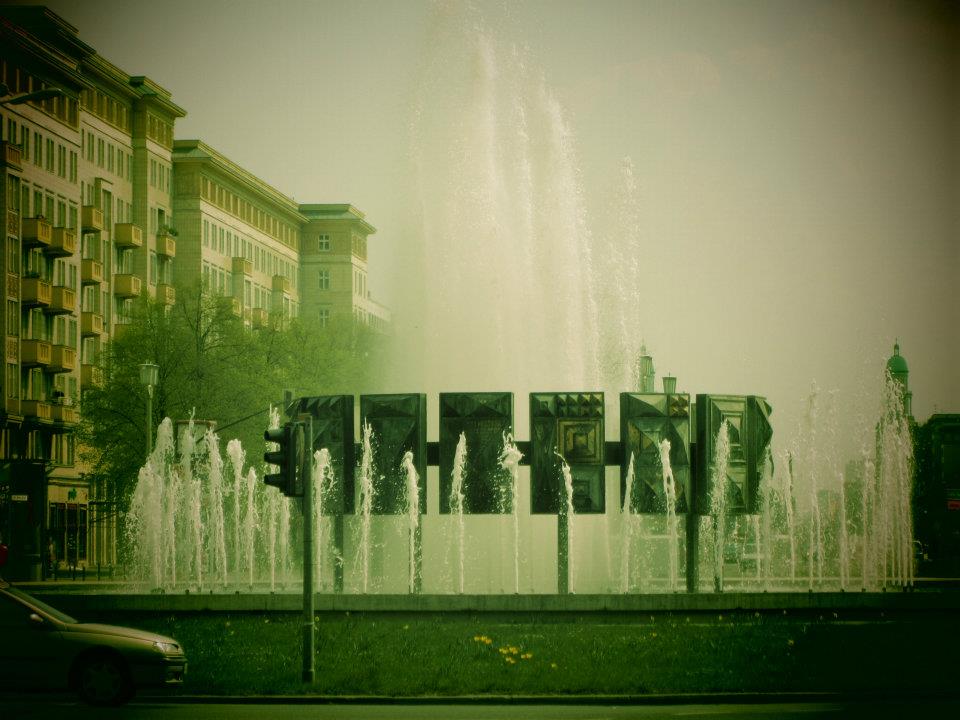 Then on the right is the Karl Marx Buchhandlung, the main bookshop in East Berlin during communist rule. It is no longer a bookshop since the last owner, Erich Kundel, could not afford the 4,000 euro monthly rent so he closed it in 2008. However its frontage is a listed monument so the sign is preserved. 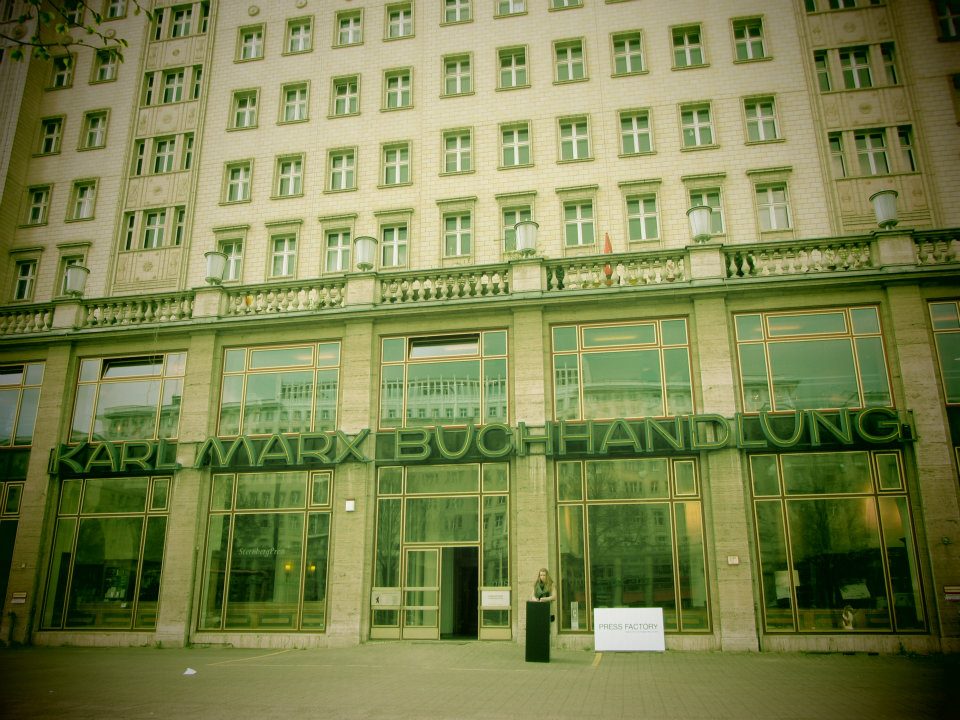 Last but not least is Bar CSA, in what was the former office of Czech airline CSA, offering cocktails with East bloc-nostalgic names. 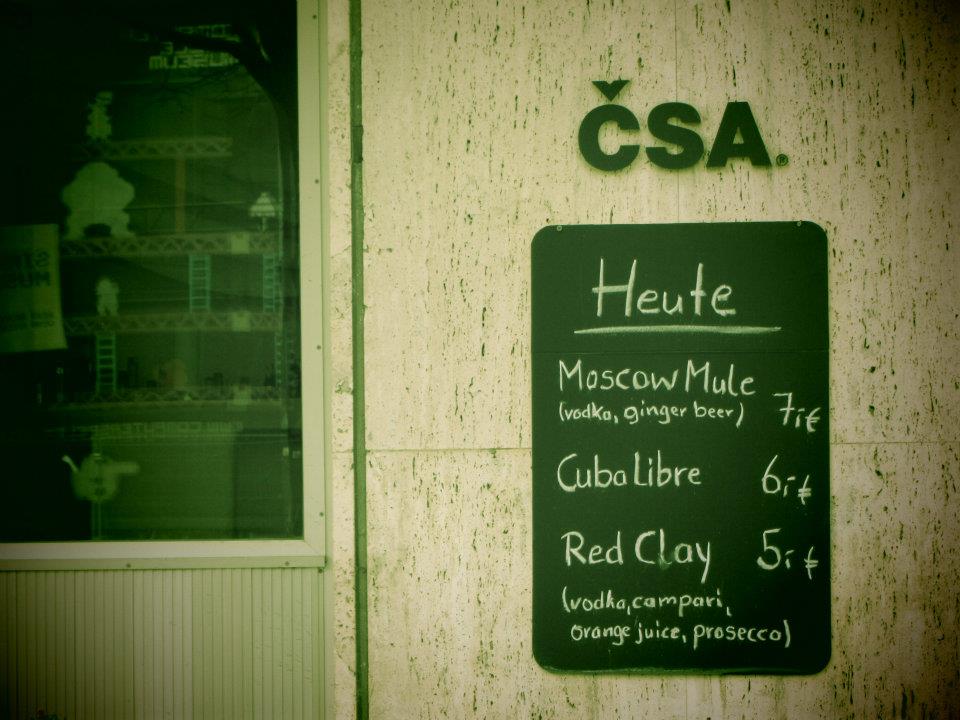 My time that day was limited because I had an appointment with a friend, so I ended my Karl-Marx Allee tour. The next day, I went to places named after Rosa Luxemburg, the socialist- Marxist-feminist-philosopher-economist (ah, so many labels!). 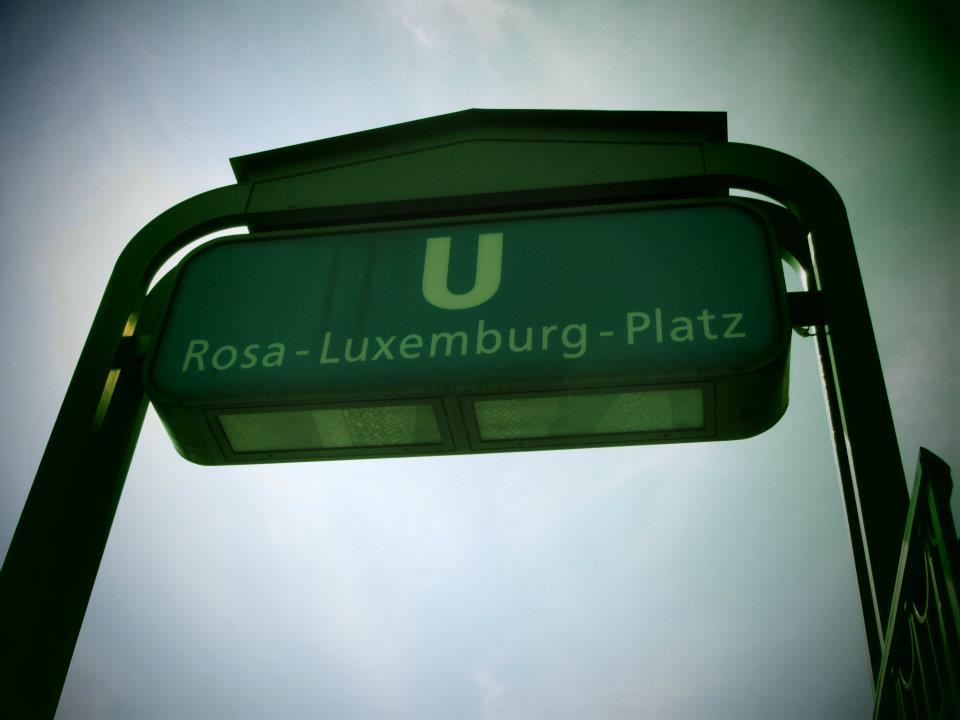 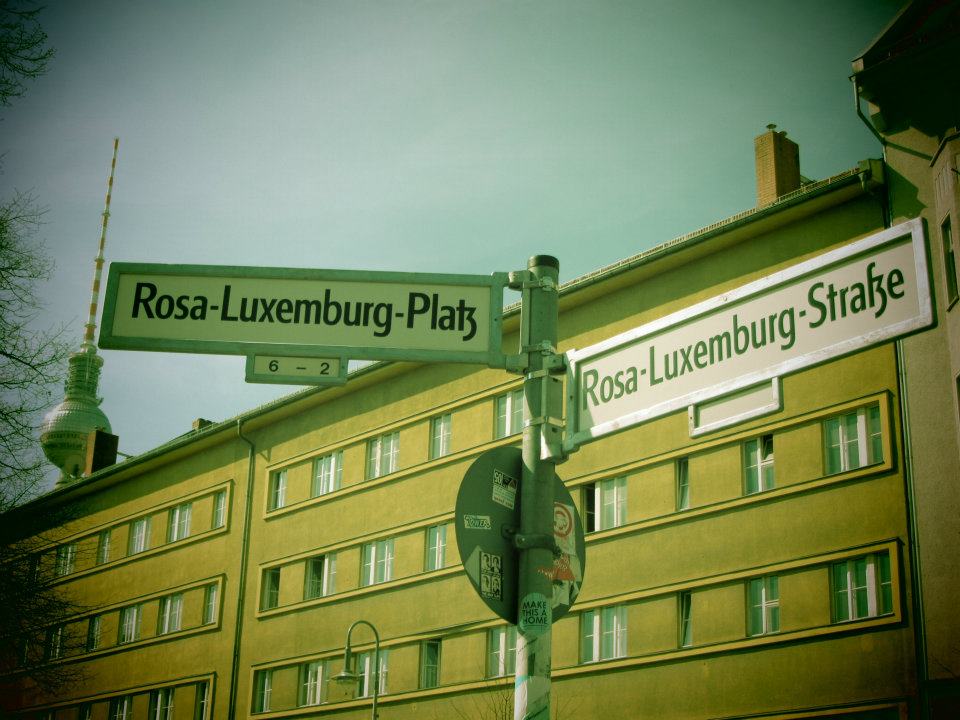 Right on the square is Volksbühne, the theatre built in 1913-1914 to provide cheap entertainment for the working class. 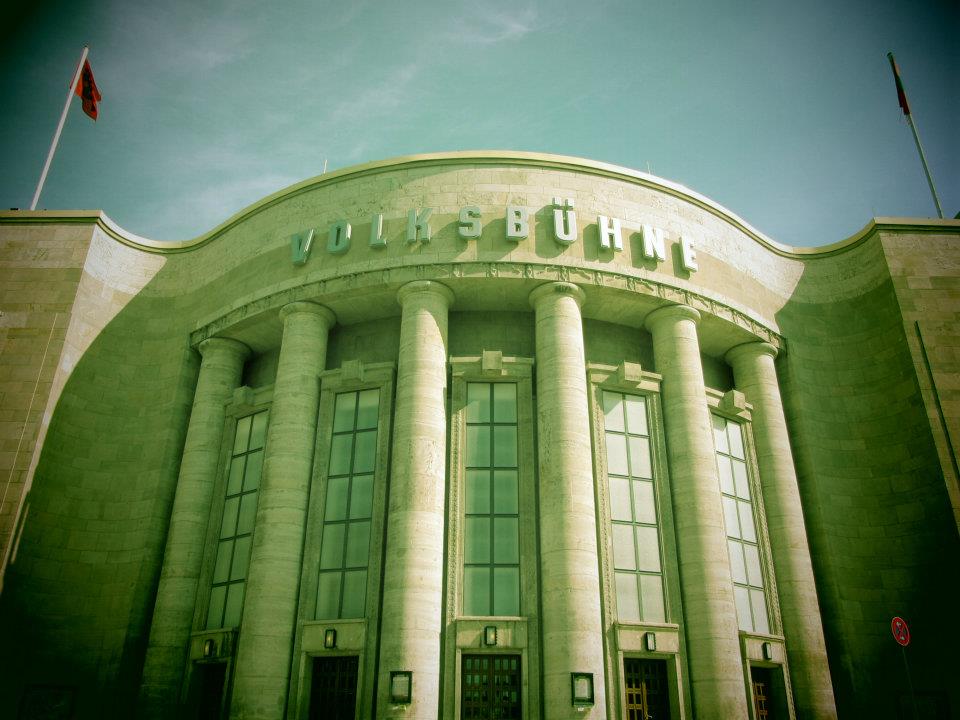 On the square, which is actually triangle-shaped, there are some quotes from Rosa Luxemburg. 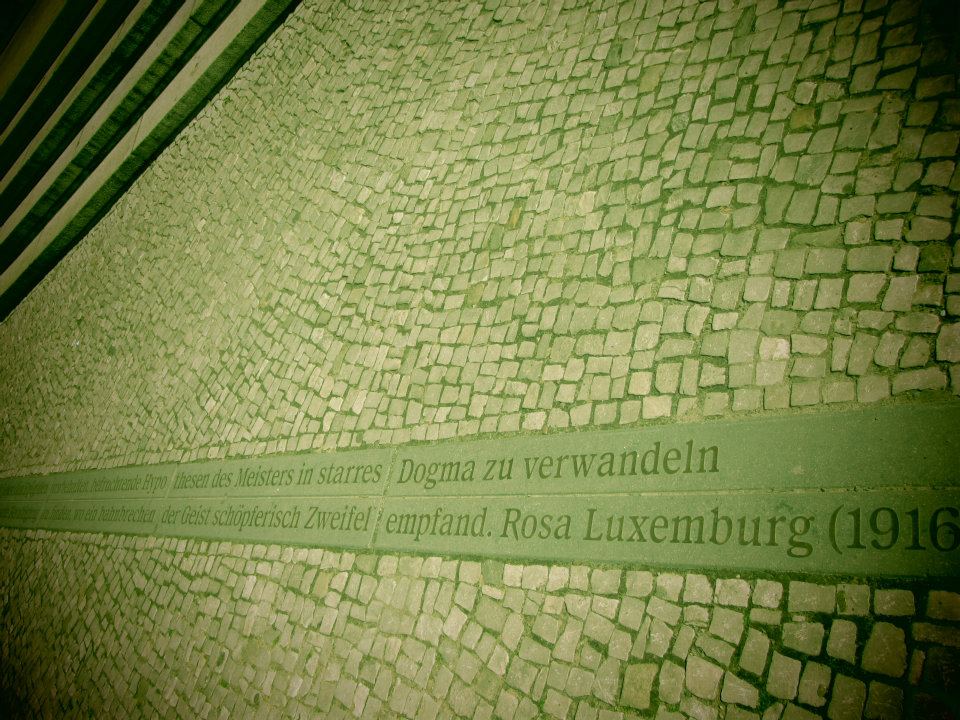 Nearby is a statue of her, of which I didn’t take any picture, because I was not sure whether it was Rosa Luxemburg. Unfortunately, it’s definitely not as monumental as Marx and Engels’ statues. You can see a snapshot of it here.

While I was walking around, I noticed that the office of Die Linke — The Left political party — was located a block away from the square. How convenient. By the way, Die Linke’s political foundation is named Rosa Luxemburg Stiftung. 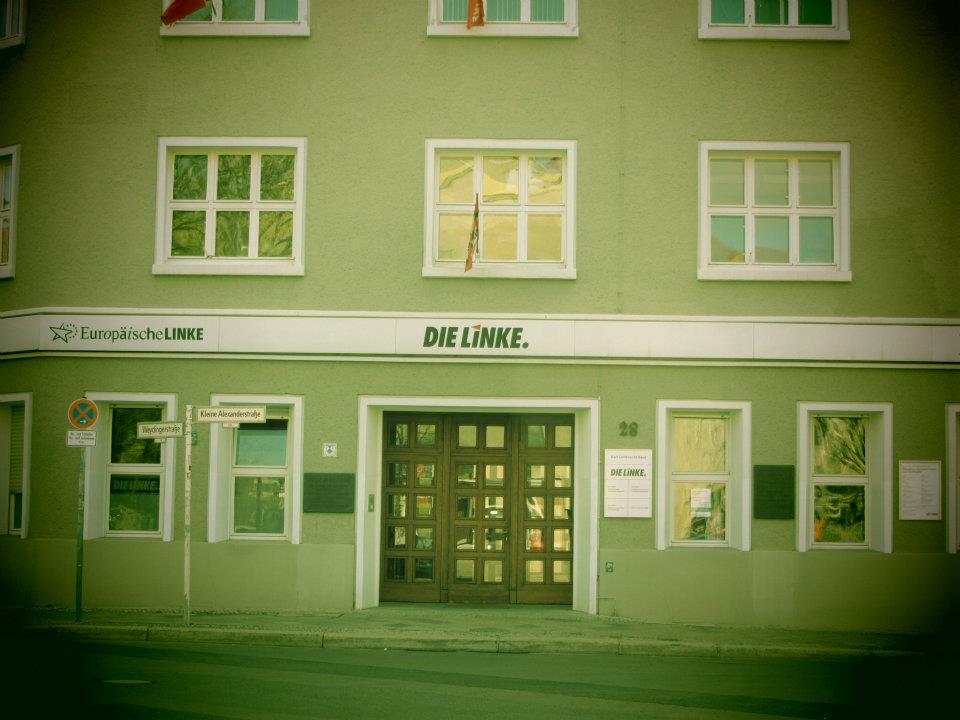 The day after, I met an uncle who worked as Indonesian embassy staff for about three decades since the 1970s. The embassy was located in East Berlin, while the Consulate was in West Berlin. As a diplomatic staff, he could cross the borders without problems. I asked him what the East Berliners and East Germans during the Cold War were like — uptight? gloomy? grey? unhappy?

‘They seemed pretty content. Life was not that bad,’ he said.