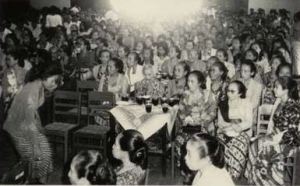 Today’s mother’s day in Indonesia. There’s nothing domestic about Indonesian’s mother’s day. And I’m always proud of how it is different than the one celebrated in other countries.

It was started with a feminist event: the day of the first Indonesian Women Congress from December 22 to 25, 1928. (Simone de Beauvoir was only 17 by then, I wonder what she did that day in France 😀 By the way, the first recorded Indonesian women’s organization was established in 1912. Others followed suit, driven by diverse motivations, but similar goal: to improve women’s condition.)

The initiators were Soejatin, Nyi Hadjar Dewantoro, and R.A Soekonto. The Congress was based on the idea of young female teachers who were members of the Javanese youth organization Jong Java. Yogyakarta was selected as the host because it was the city where Jong Java established its women branch organization, Poetri Indonesia.

The meeting was attended by the leaders of 30 women organizations from 12 cities in Java and Sumatra. At least 600 women participated. 15 speakers sparked discussions.

Various issues were discussed in the Congress, such as involvement of women in the struggle for independence, trafficking of children and women, improved nutrition and health for mothers and toddlers, as well as polygamy and early marriage for women.

It is interesting to see that polygamy led the Congress to a heated debate. However, the Congress leaders saw the debate was not necessary. They managed to convince participants that it was more important for women to come together. Because they faced greater enemies: the Netherlands colonialist, and the conservative native Indonesians who harassed women.

The Congress decided to create a united front against the parties who were against the involvement of women in politics and national activities. The league of extraordinary ladies was named Perikatan Perempoean Indonesia (Indonesian Women’s Association), led by R.A Soekonto. The organization evolved into what now is Kongres Wanita Indonesia (Indonesian Women’s Council).

To respect the Congress and women movement, President Soekarno in 1959 declared 22 December as Mother’s Day.

82 years after the Congress, what can we see in Indonesia?

Yes, women now can work with men in almost every sectors. Yes, women can vote in elections. 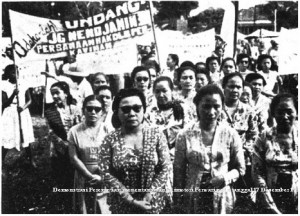 But in most cases, women are paid lower than the opposite sex. Women legislators, politicians, and policy-makers are dwarfed in numbers (and power) compared with men. Polygamy is still an unfinished debate.

Indonesia has the highest maternal mortality rate in South East Asia: 307 mothers died per 100,000 live births. It means every day, there are 50 maternal deaths, and every hour two mothers died due to complications from childbirths.

And nowadays, Indonesians tend to celebrate Mother’s Day like the people in the western hemisphere do, a celebration of women’s domestic role. There’s nothing wrong with celebrating the domestic matters, but it definitely is not the spirit of Indonesian Mother’s day.

We’ve got a lot of work to do.

the first image and some information in this entry is from here.
and the second is from there.