This post was written while I was waiting for my connecting flight last night.

The first leg of my continent-skipping trip was ended around 2 am Jakarta time, when I arrived at Dubai after a 7,5 hours flight. The flight was okay despite the turbulence (I’m always amazed by the fact that the cabin attendants are so used to turbulence that they can manage to walk, smile, and serve gracefully).

My seat was in a middle of 4-seats row, but fortunately found an empty seat by the aisle which made me able to gladly move there, so it’d be easier to go to the loo and walk the aisle (without white dress nor background music here, hehehe). I kept in mind Okta and Camelia’s advice of get off the seat and walk once in a while to avoid the famous economy-class-syndromme.

I slept like a baby (like always) during half of the flight. The best feature of the cabin interior, in my opinion, was the ceiling. When the light was dimmed, the ceiling was lit by tiny lights that resembled stars in the sky. Beautiful little touch that would surely stay in my mind, and perhaps other passengers, too. 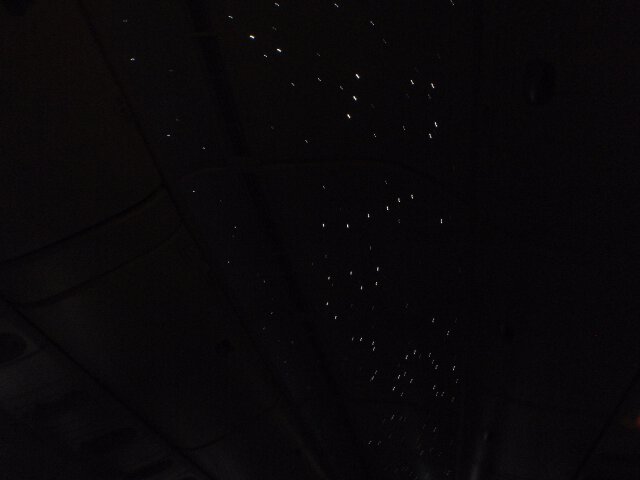 The food was surprisingly good. I had dory fish with noodles, which was tasty — I guessed it was pre-cooked in Jakarta so it matched with my Indonesian taste. The real, stainless steel cutleries (as mentioned by Jam previously) would make my mom and I jump in joy because we simply dislike plastic eating utensils. I found the toothpick unusual, it’s plastic, and seemed like a small straw slit diagonally. 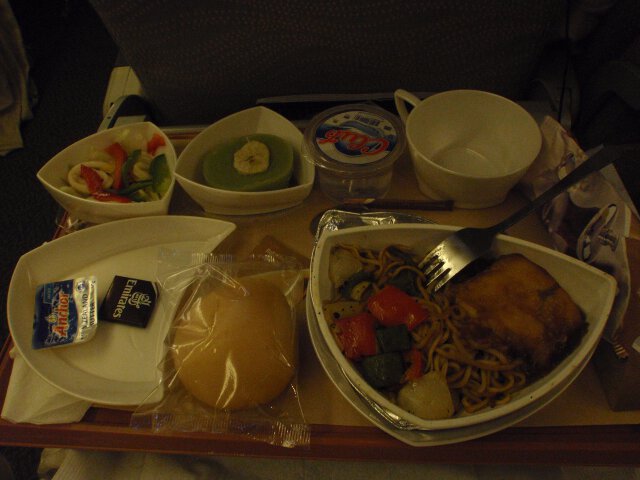 My first meal on Emirates 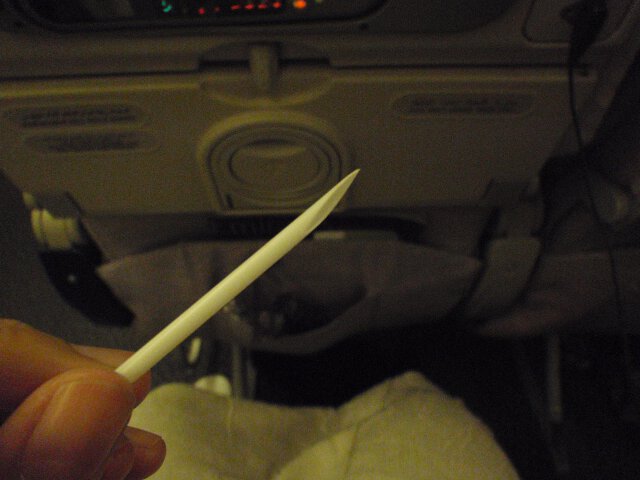 However, unlike Jam, I don’t like Emirates’ stewardesses uniforms, especially their headdress. I think that white fabric hanging on the right side of their hat is weird and seems like an obstacle for their proper work. Good thing they removed the headdress while working in the cabin.

I managed to watch The Company Men, a couple episodes of How I Met Your Mother, and half of an interesting Japanese movie Princess Toyotomi. I’ll watch the rest of that movie in my next flight, from Dubai to Amsterdam (which is, by the time I’m typing these words, still 6,5 hours from now).

When I arrived, it was 11 pm Dubai time. 9,5 hours before the next flight. So I decided to go around, walking from the middle to the west end to the east end and then back to the west end, where my gate (203) is. The airport’s okay, with a myriad of 24-hours restaurants and duty free shops dubbed as “the best in the Middle East” and “a shopper’s dream”. 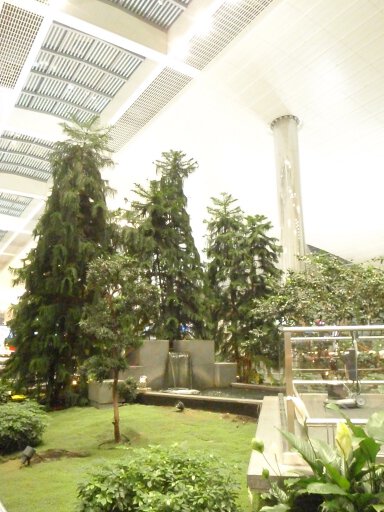 There are two small so-called zen gardens at both ends of the airport which I think deserve “middle east gardens” as a more proper name since it’s the first zen garden I’ve seen with palm trees in it. Not to mention that they’re not tranquil enough, because both have small waterfalls (which is a bot noisy) instead of fountains with trickling water. The gardens are only equipped with a single bench in them so not many people can actually enjoy it. The gardens pale in comparison with Kuala Lumpur International Airport’s mini rainforest (*sigh* no matter how much I don’t like Malaysia, I have to admit the small rainforest is really good). 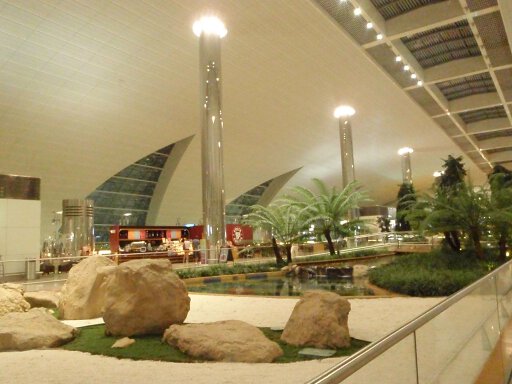 The other "zen garden"

I was tempted to buy liquors, sold less than half its price in Indonesia after tax, but realized that I didn’t have extra hands nor strength to carry more items. My 10 kg-heavy backpack was already breaking my back, all the trollies seemed to be missing/used by other passengers in this airport, and there’s a 34-kg luggage that I’d have to drag from Amsterdam Schiphol Airport to the train station and then from the Den Haag train station to ISS student office to my dormitory.

I was glad when near the west end I found the Courtyard Cafe, a free-of-charge cafe providing snacks for Emirates transit passengers.. until after about an hour, when I’d finished eating two apples and a glass of apple juice, I got kicked out because they were closing. Great. Still managed to grab a bottle of water, though. 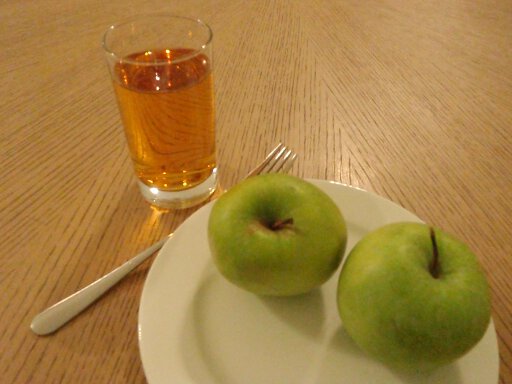 There’s wi-fi in the airport but somehow my computer could not connect. How I wish I could go to the “unaccompanied minors” room to borrow their computers and try the x-box.. 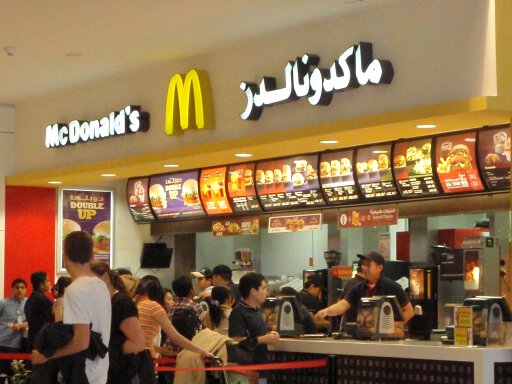 Makudunalz? (no, I didn't eat here, I just took a picture)