Around Holland With Yoga

During Yoga’s visit, we travelled to some cities in the Netherlands. Not much, they were just half-day excursions, since we usually woke up late and took a very leisurely pace everyday. The museumcard was a very good investment for both of us since museums are among the best things the Netherlands can offer!

It all started with going to Rotterdam for the IFFR. Unfortunately we didn’t really explore the city, only went to Schouwburg and Cinerama to see movies.

Days after, we went to Amsterdam to see a the Dutch National Ballet performance to satisfy my dream to actually watch ballet on stage. Am a (happy) victim of a childhood filled by ballet Japanese comics, hahaha. Too bad no pictures were allowed — but we didn’t bring cameras anyway since Yoga forgot to charge the battery. Here’s the trailer, though:

Before the fabulous performance, we went to see the Van Gogh museum. The paintings are amazing. I still think they’re more beautiful than the tiny Mona Lisa… 😀

We also went to Delft. It’s such a nearby town we could just use tram, not even train, to reach the place. We managed to explore the Museum Nusantara, a small museum about, well, Indonesia, and Museum Het Prinsenhof, which tells the story of Willem of Orange’s assassination and the portrait painter Van Malievelt. The next destinations for photo-ops, after a late lunch, were the townsquare and the (evil) VOC‘s former chamber office. 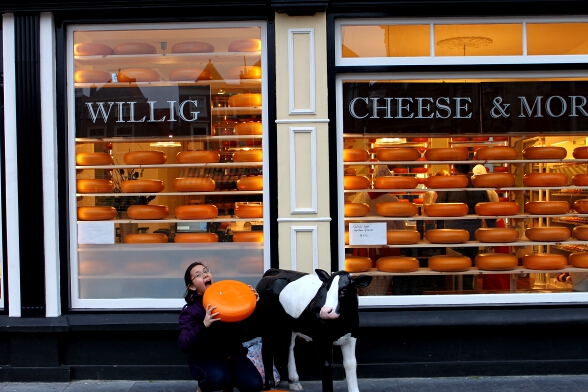 The last city we visited was Utrecht, for a dinner with Ly, Stan, Dinnia, and Sam. It was Monday so unfortunately all the museums were closed so I could not take him to my favourite museum, Museum Speelklok. So I gave him a short explanation of the Domkerk and Domtoren. Then we walk along the Oudegracht canal to the Nijntje Pleintje, the Little Miffy Square. I’m not a big fan of Nijntje / Miffy but since there was not much to do, so, why not? 🙂 The square was really small and the Nijntje statue was also small but it was so cute. 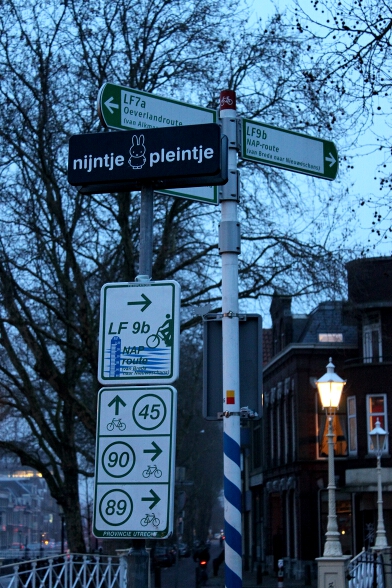 By bus, we went to Roberto Gelato to taste its delicious ice cream and then bag a litre of five flavours to bring to Ly’s place. The dinner was amazing and the night was so fun, thanks to perfect Utrecht quartet that I call friends!

In The Hague itself, we explored bits of it, most of the times cycling like the Dutch do. Memories are scattered in Vredespaleis, Scheveningen, Sumo, Scheveningse Bosjes, Cafe Dudok, Hofvijver, Mauritshuis, Van Kleef Distillery, Salero Minang,… well, too many places to mention.

All in all, the cold and windy Holland seemed to be much better when he was here.