The Trip To The Warmer South: Day 1

At the beginning, Alghero was chosen simply because: 1. It’s in the southern part of Europe, which means it’s warmer than the Netherlands; 2. RyanAir offers cheap return ticket, less than 50 euro. Martha (from Canada), Nany (Colombia), and me bought it weeks before our first exam, and made it as a carrot of our race, hahaha, shining as a reward after the hardwork. Later, Mariu (Colombia), Hawa (Ghana), Tina (Indonesia), and Wienda joined in (although unfortunately Wienda had to cancel it). We still had to pay extra 36 euro for a return train ticket from The Hague – Eindhoven – The Hague since the flight’s from and to Eindhoven, but overall 86 euro to go to Italy is still a bargain!

It was my first time using RyanAir and I was really surprised of their standards of comfort: undesignated non-reclining seats with minimal legroom (thanks God I’m short). Somehow AirAsia, Asia’s budget airlines, seems like SQ compared with RyanAir. However, after nearly two hours, we landed on Alghero. It was a rough landing but we were glad to finally reached Italy! Yayness! Never been there before… 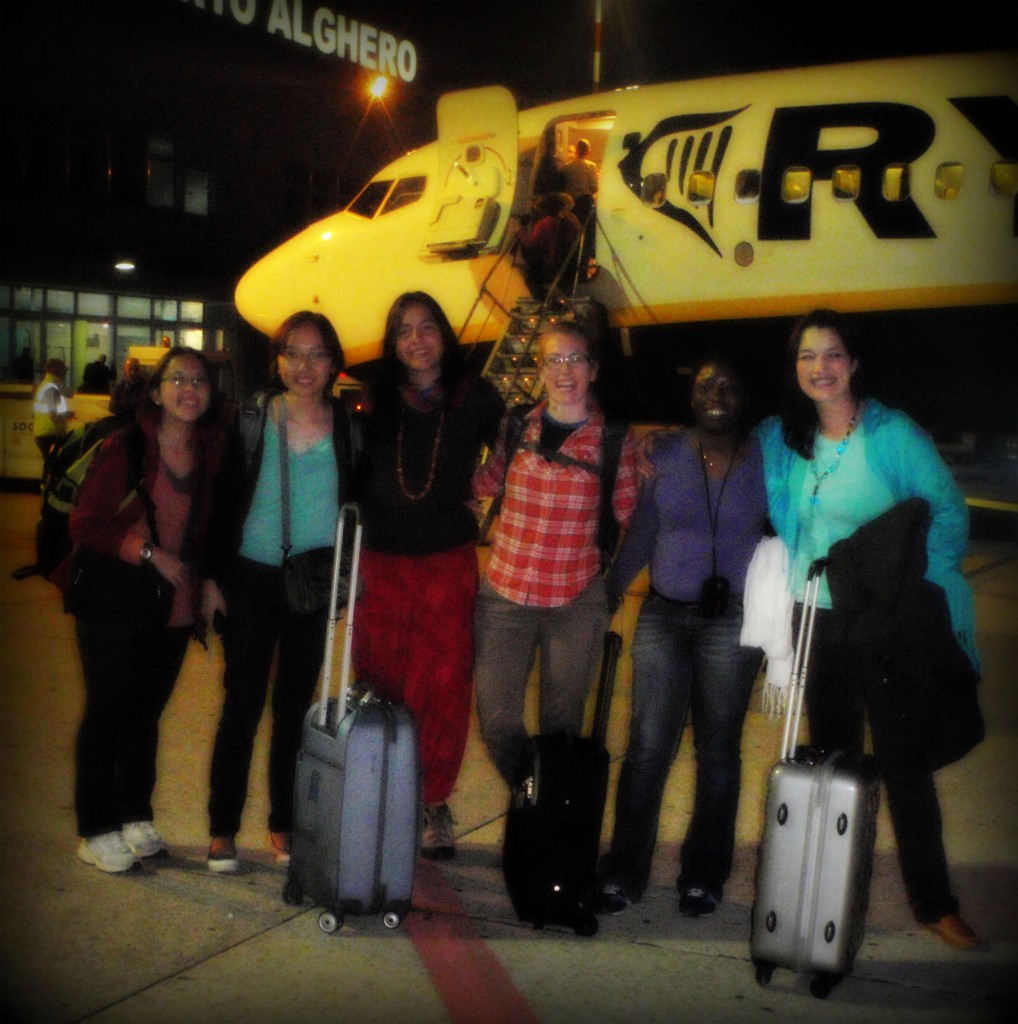 Saw some Italian guys in the airport and yes, damn, they’re haaaaandsome! And elegant, and sleek, and seem delicious. *friends, please understand this is just an effect of having so looooong time away from my boyfriend… er… well, perhaps not.

We took a 1-euro bus ride to the town, approximately less than 30 minutes before we arrived at the last stop, Piazza Porta Terra. We walked along the public park’s peripheries for five minutes to reach our apartments in the Via Vittorio Emanuele. The apartments were clean, nice, and completely equipped (kitchen+its utensils, towels+linen, washing machine+detergent, air conditioning etc), and it’s so cheap: about 12 euro per person per night. It’s also very near to the historic old town, only about seven minutes of walking away.

The owner, Federica, was there to explain everything from how to use the heater until the recommended restaurants around town. She’s really beautiful, by the way, with full make up, lace stockings, and high heels. We awed upon seeing her (and her as-beautiful mom, Maria Assumpta), and felt like we’re so grubby beside her.

We decided to look for Poco Loco, a pizzeria she recommended, but after 20 minutes of walking to the direction she pointed out, we could not find it. Finally we went to Paco, a restaurant nearby the Torre di San Giovanni, which was packed with people, tourists and locals alike. It was a perfect choice: the food was amazing! I had tuna spaghetti and it was delicious. 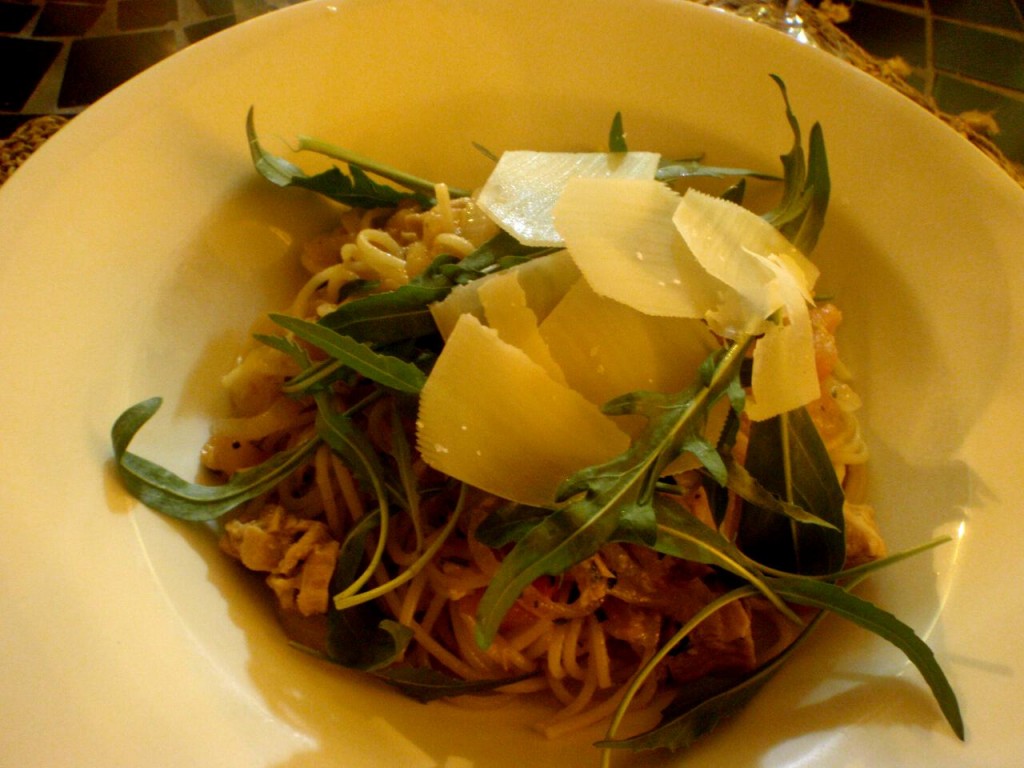 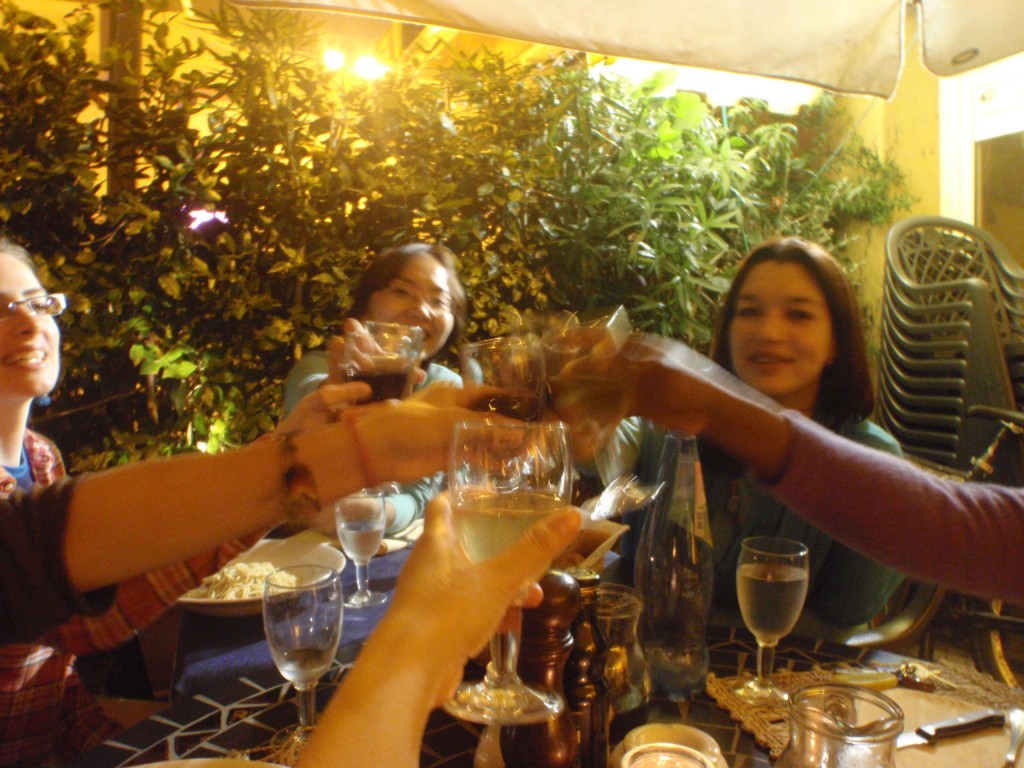 Next to our table was a couple of German senior citizens who seemed to enjoy their time. The man was so kind that he asked us whether we’d like him to help taking our picture. So here’s what he snapped on my camera: 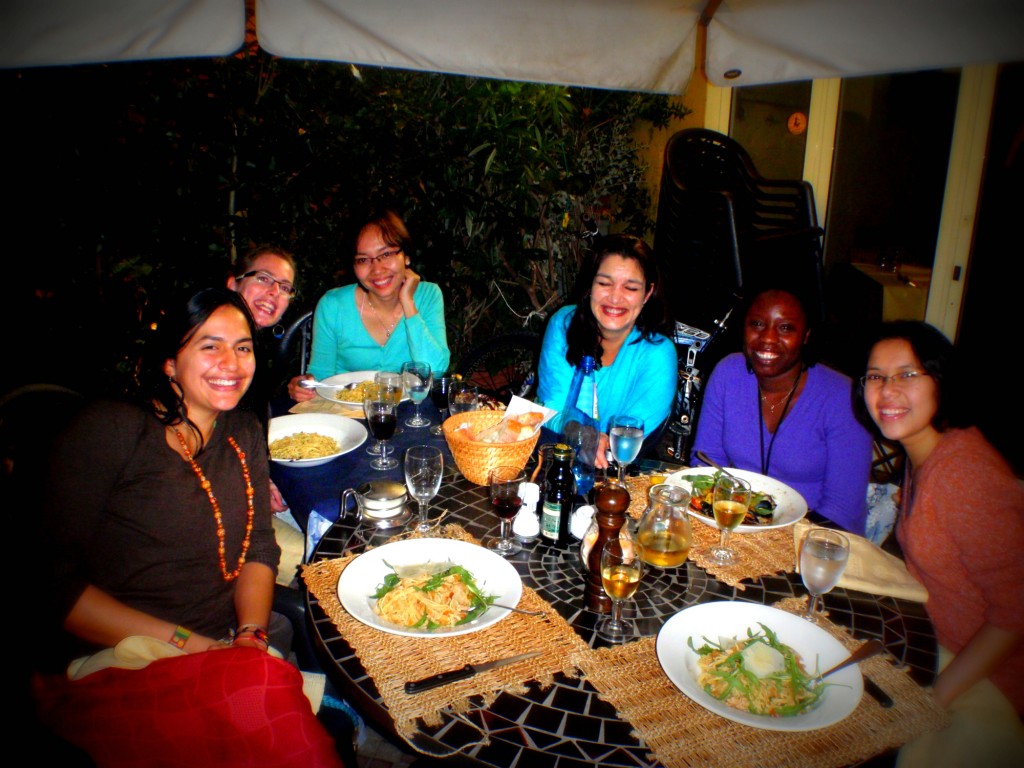 Later on after we finished our meal, the manager of the restaurant told us that the couple’s buying us dessert! So she will give us two portions of their three signature desserts: creme catalana (a Catalan version of creme brulee), tiramisu (self-explanatory), plus cinnamon ice cream with nuts, biscuits, melt chocolate and whipped cream (of which I forget its name since it was HEAVEN SENT! God damn delicious!) 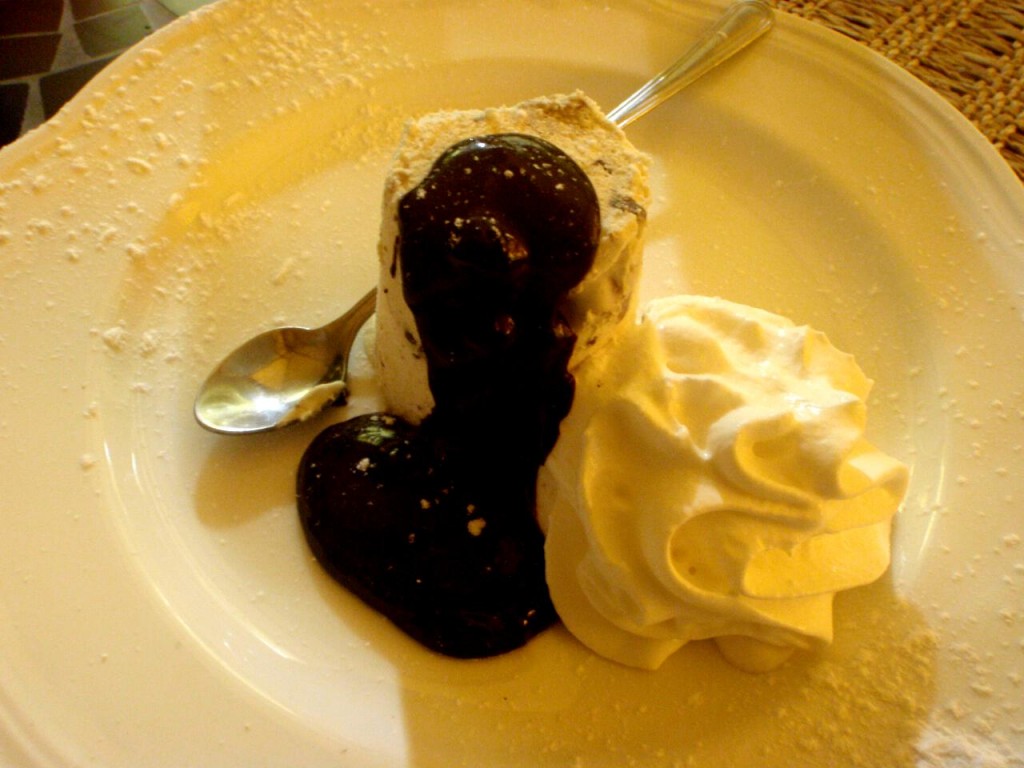 We couldn’t say no because the had paid for it anyway (each was 5 euro so it was 30 euro in total) and heck, who would say no to such an offer? We were dumbfounded and speechless to receive such kindness. Mariu, who could speak German, thanked them for their wonderful good deed. We found out that their names were Helmut and Alexandra. Needless to say, we were so happy that night. What a perfect start for a holiday! 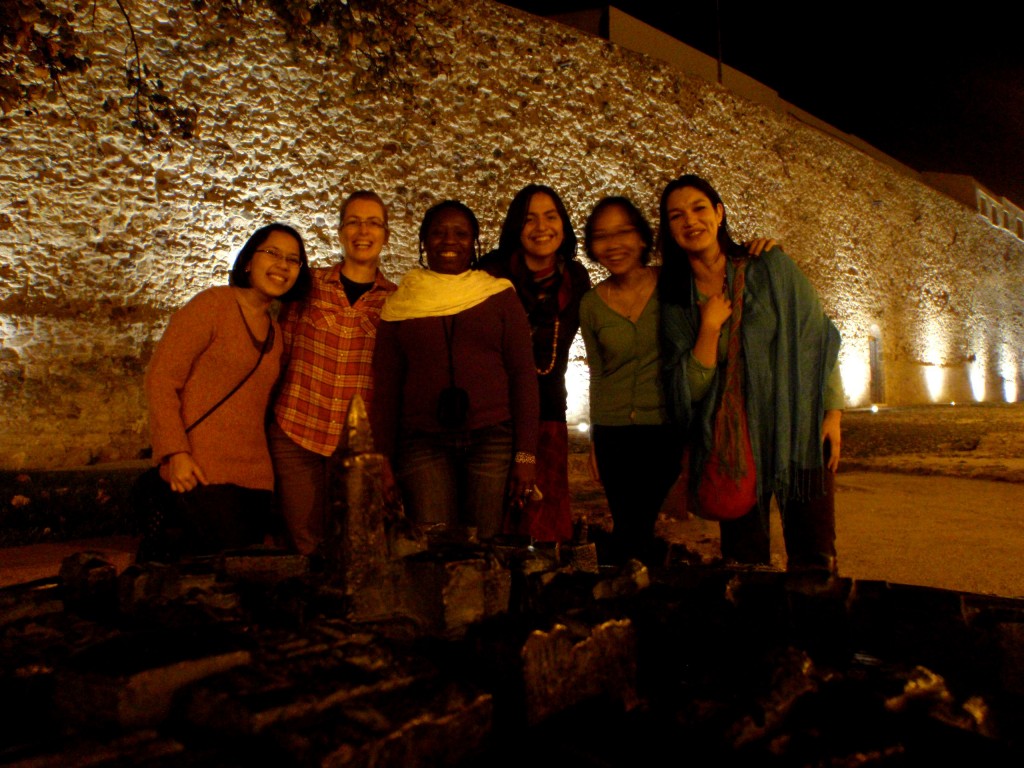 Happy faces after the wonderful dinner... 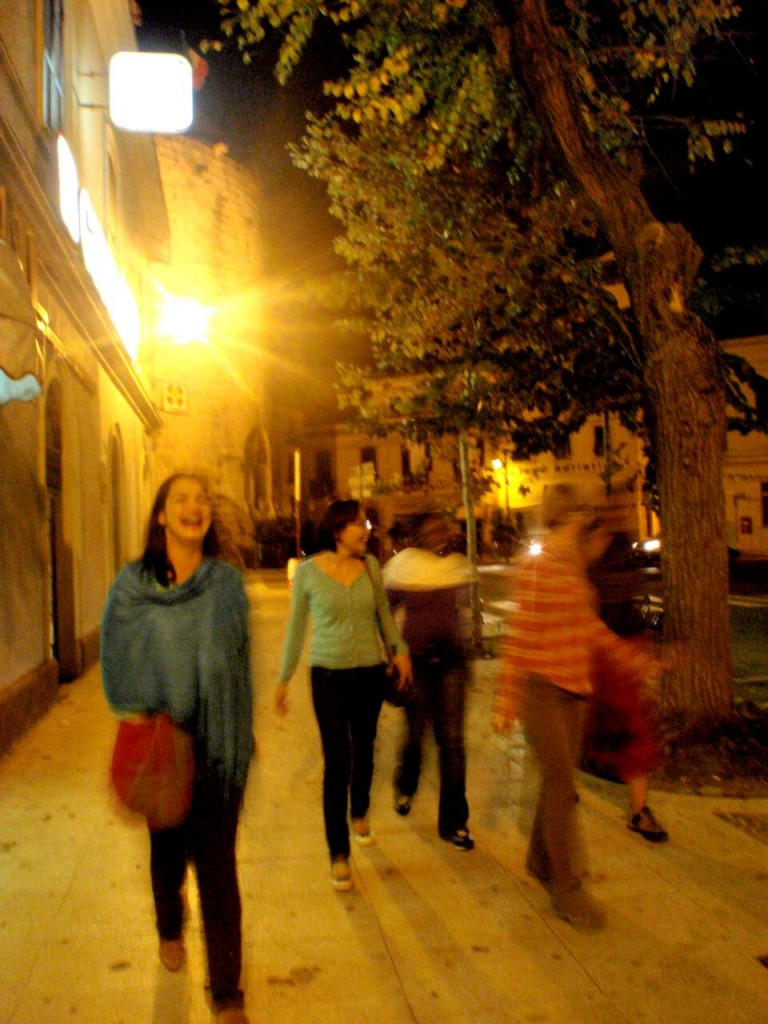