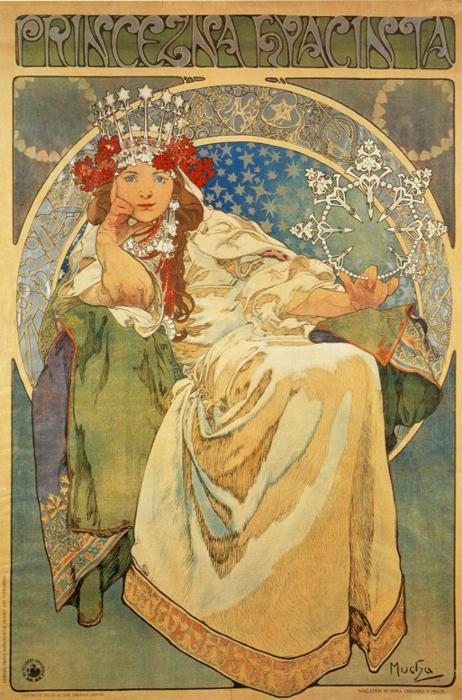 Never Too Much of Mucha (and Manga)

I went to Prague a few weeks ago and I had some serious dose of art nouveau fix. To be exact (and dramatic), I felt like almost died, overdosed.

Alphonse Mucha is art nouveau and art nouveau is Mucha, no matter how he actually refused both the term itself and being associated with it. And in Prague, where he settled in his later years till his death, Mucha left plenty traces.

My first sight of Mucha being mentioned in Prague was posters in many places, announcing the exhibition of his posters as collected by the tennis athlete Ivan Lendl. Then when I entered St. Vitas cathedral, I saw his beautiful stained glass in the north nave. I stood for a while, absorbing the beauty and trying to take pictures from the non-paying area — the view will be better from the paying area, of course, but since I tried to save money, here’s all I’ve got: 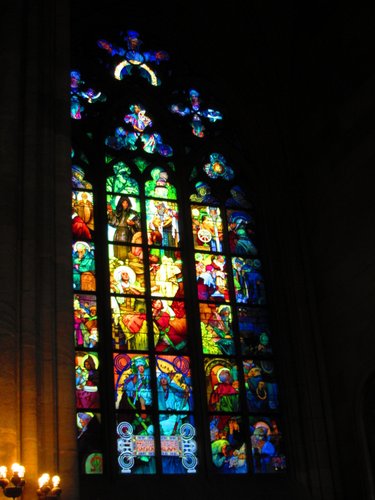 Installed in 1931, the window portrays the boy St. Wenceslas with his grandmother St. Ludmila in the centre, surrounded by episodes from the lives of Saints Cyril and Methodius who spread Christianity among the Slavs. The image of Slavia, symbol of the Slavs, appears below Christ, and as an emblem of Slavia Bank who sponsored the window. 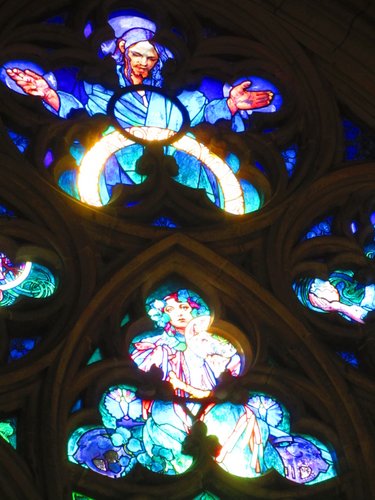 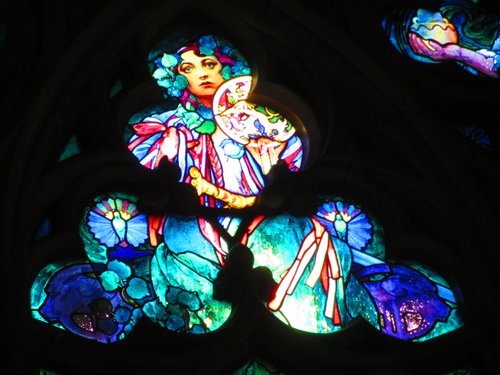 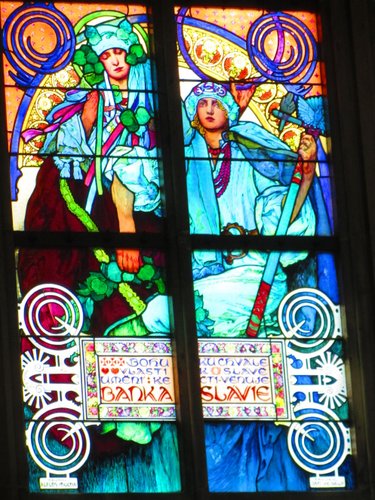 In the same day I went to Obecní Dum, the Municipal House, where Mucha painted the murals. I hesitated for a while, contemplating whether I should take the guided tour to see the murals and/or the Lendl’s posters exhibition. Since I already had plan to return to Prague in the near future, I decided to postpone it to the next visit (and again, to save money hahaha).

I visited the Mucha Museum instead in the next day. The museum is small but packed with treasures which made me occupied for a couple of hours. Taking pictures was prohibited and it irritated me, but then a (half) Indonesian girl I later met in the hostel told me that such restriction might be good. “If we’re allowed to take photos, we’ll be so busy clicking our cameras. The prohibition makes us take our time to really appreciate the artworks, to record the details of the works in our mind,” she said. Wise girl. I think she’s right.

Anyway, one of the most important collections are the Gismonda poster and its proofs. It was the breakthrough for Mucha — he made the poster for the actress Sarah Bernhardt. in December 1894. According to scholar Ian Johnston, “around Christmas Mucha happened to drop into a print shop where there was a sudden demand for a new poster to advertise a play starring Sarah Bernhardt, the most famous actress in Paris. Mucha volunteered to produce a poster within two weeks, and on January 1, 1895, the advertisement for Gismonda appeared on the streets of the city. It was an overnight sensation and announced that this hitherto largely unknown artist from a remote part of the world had delivered a new artistic style to the citizens of Paris.” Bernhardt liked the poster so much that she contracted Mucha for the next six years.

Among the pretty pictures, some of my favourites are:

The Arts: Poetry (1898)
Poetry is personified by a female figure gazing at the moonlit countryside in contemplation. She is framed by a laurel branch, the attribute of divination and poetry. 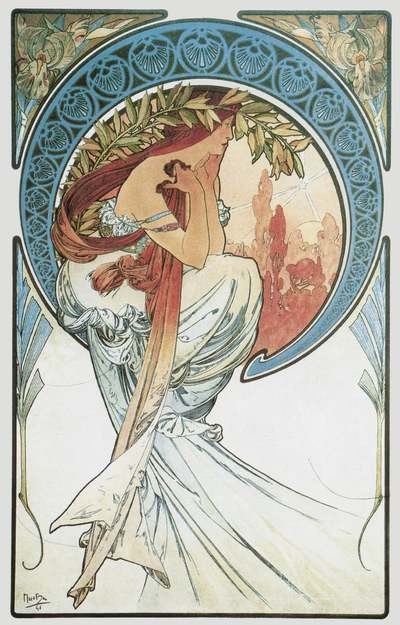 Princess Hyacinth (1911)
A poster for ballet-pantomime Princess Hyacinth which premiered in 1911 at the National Theatre, Prague. It features the portrait of the popular actress Andula Sedláčková, who starred in the title role. In the play, a village blacksmith dreams that his daughter becomes the Princess Hyacinth and that she is abducted by a sorcerer. Mucha makes reference to the plot by incorporating hearts, the blacksmith’s tools, a crown and instruments of sorcery. A hyacinth motif is used throughout the decorative details.

The museum also showcased Mucha’s lesser-known works, such as paintings. Woman in the Wilderness (1923) was one which caught my attention. Also known as Star and Siberia, this painting could be seen to express Mucha’s love for Russia and her people. When he was young, Mucha was strongly influenced by Pan-Slavism and regarded Tsarist Russia as an epitom of Slavic values. This painting may have been Mucha’s response to the terrible sufferings endured by the Russian people after the Bolshevik Revolution, which culminated in the Great Famine of 1921. A Russian peasant woman, symbolising the suffering of the nation, sits quietly with a gesture of acceptance of her inevitable fate. The star shining above her indicates hope and spiritual salvation. Sad but poetic. 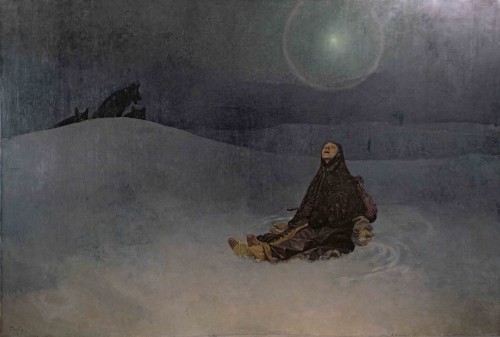 At the end of my visit, I almost bought a pair of postcards, priced at around 25 koruna (approximately 1 euro) each, but then found out that the store had a discount for the A-3 sized calendar. As it was already April, the calendar price was lowered to 90 koruna (3.5 euro). With 12 pages of months which can be very pretty posters, it turned to be much cheaper than the postcards hahaha.

Outside the museum, the fangirl happily took pictures with Primrose and Feather. Somehow Feather reminds me a lot of Ros, the character in Game of Thrones series. 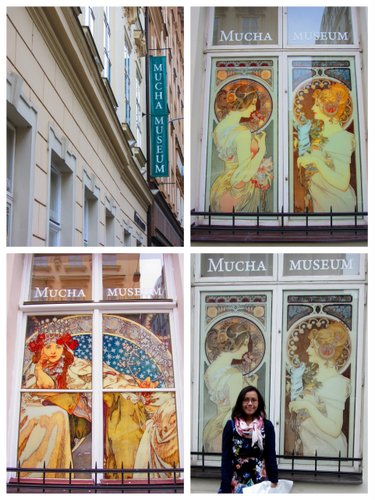 So. What’s the connection of art nouveau with manga? While reading art nouveau wikipedia entry, I saw the name Naoko Takeuchi and her Sailor Moon being mentioned. I tried to remember her illustration — the manga is one of my favourites of all time, and for sure it’s much better than the anime — and yes, she did put some art nouveau touches, such as in these pictures: 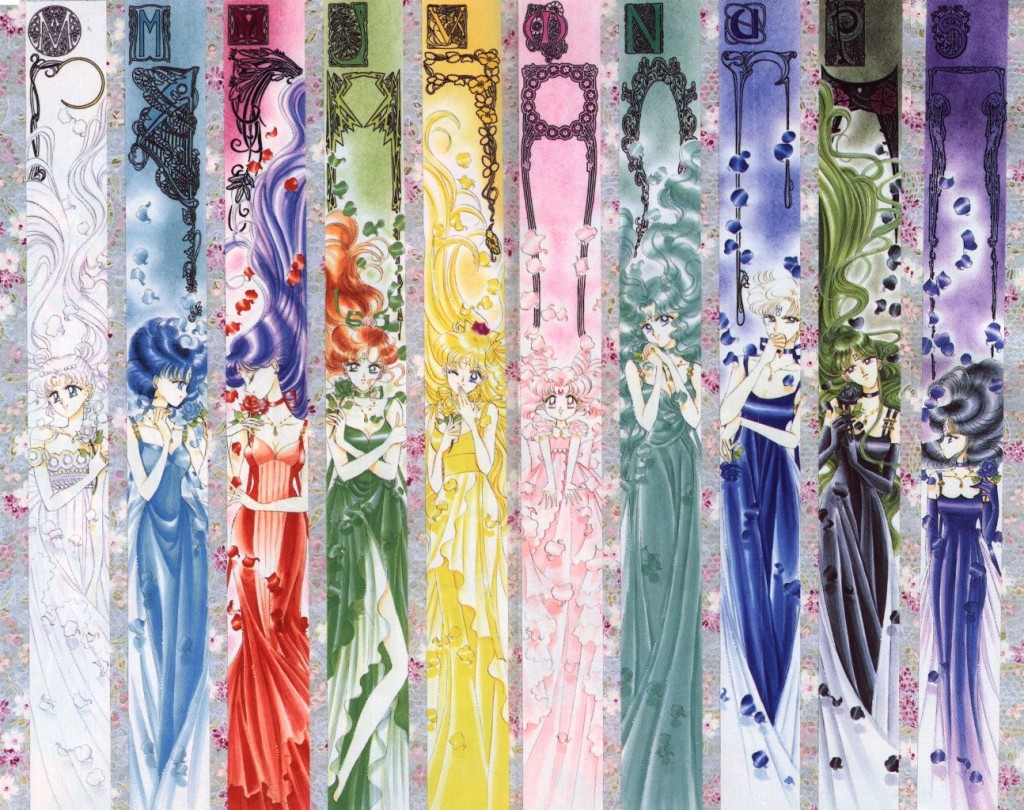 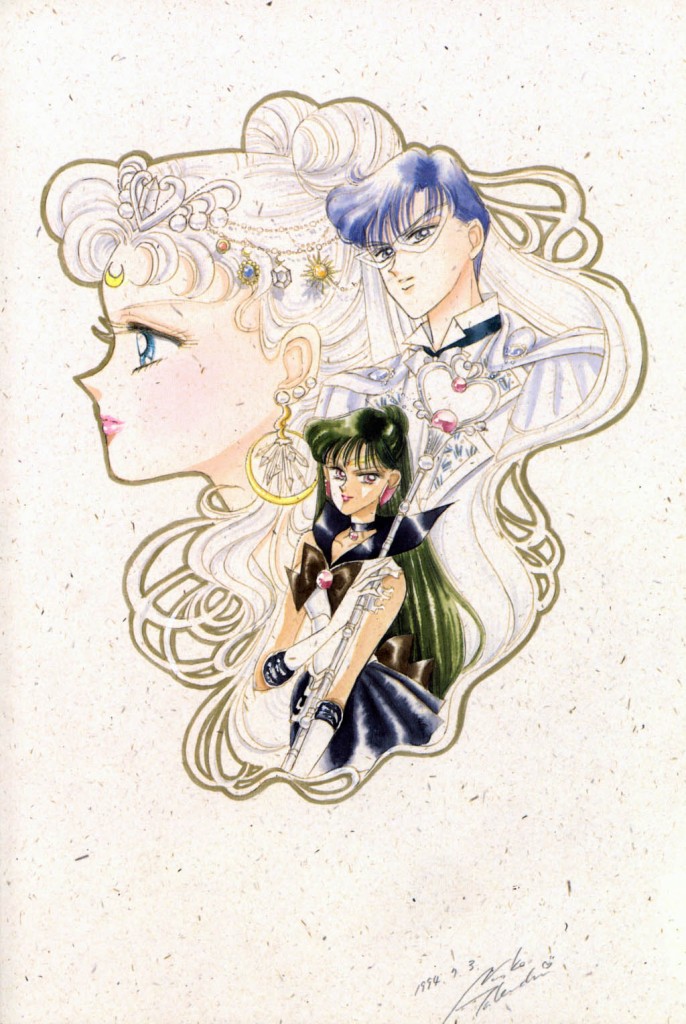 I also vividly remember that CLAMP also like to make illustrations with art nouveau influence, such as the ones which feature the Magic Knight Rayearth: 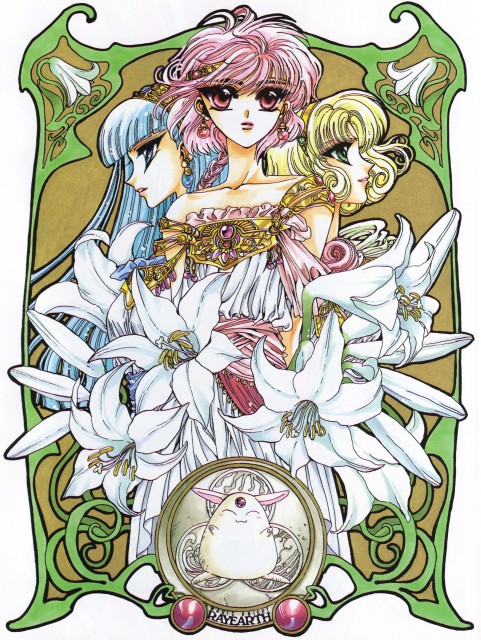 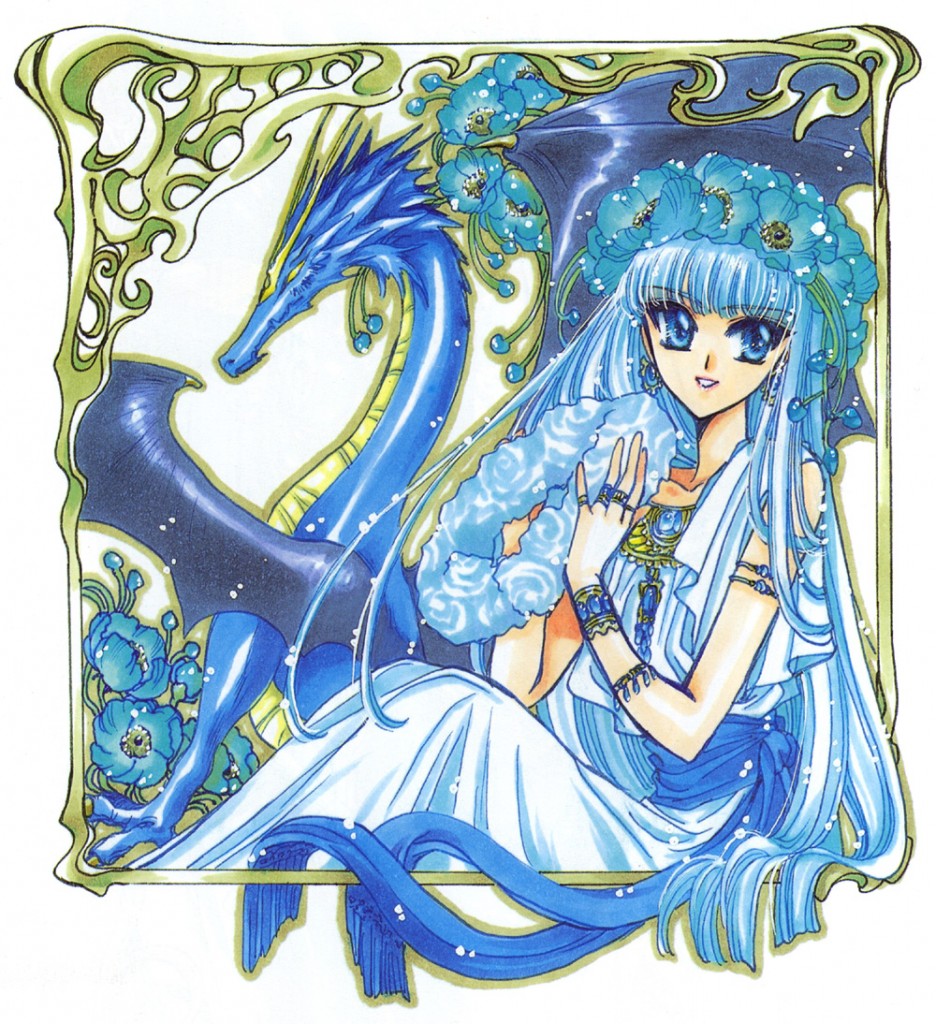 And I realised that perhaps my affinity for art nouveau roots in those fond childhood memories.