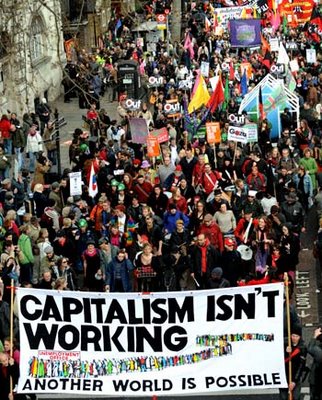 I never considered myself as a capitalist — I hated it (and still do) but I usually thought that the rise of capitalism is inevitable anyway. In the sense of, whatever happened in the past (even if there is parallel alternative past, if you believe in it), one way or another, capitalism would rise and rule the world like it does now.

Then I came to ISS, which is actually known for its leftist tendencies 😀

Last week, in the first week of lectures, all the four foundation courses were talking about capitalism. Haha. In sociology, economy, politics, and development histories — all we discussed were capitalism. From the history, the theorists, the practices, the concepts, the accomplices (bitching about IMF and the World Bank is of course included), until its critiques.

It’s a little bit mind-blowing, especially given the fact that actually I haven’t read all the required reading materials.

A glimpse of the characteristics of the system convinced me of how vicious the system is: everything’s for sale, including human labour; huge market dependency for all actors; constant competition; profit-maximization.. and they call it as natural for human beings to do so. Look at the economic mess caused by capitalism in what we used to call “developed countries” now! (One lecturer confidently claimed that the US and Europe would dip into crisis anytime soon, instead of recovering from the previous financial crisis, and I couldn’t help myself to nod on his forecast.)

What Ellen Meiksin Wood said changed my mind about the inevitability of capitalism:

It is a late and localized product of very specific historical conditions. The expansionary drive of capitalism, to the point of virtual universality today, is not the consequence of its conformity to human nature or to some transhistorical natural laws but the product of its own historically specific internal laws of motion.

In short, if the British ruling class in the 16th century didn’t choose to eliminate common rights in private properties, there would be no rise of capitalism in England; France and German wouldn’t follow suit; colonialism might never happen; the motion wouldn’t gain momentum; capitalism wouldn’t be here as the ruling system. It might sound a bit simplistic, but I think it’s true.

The next question is, should we unmade the capitalist system? And how? 🙂

Let’s talk about it after I finish my reading materials… of which I don’t know when, hahaha.
——————–

The photo is copied from http://www.nakedcapitalism.com/2009/04/guest-post-viva-la-vida-g20.html