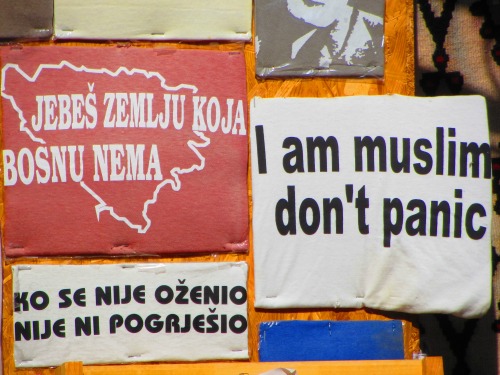 T-shirts in a stall in Mostar’s old town.

“Hi. Are you a tourist? Where are you from?” asked the tall guy who approached me at Mostar’s boulevard.

I tried to resist the urge to run away from this stranger. In most places, including Jakarta, I would only smile politely then turn my back and walk as fast as possible to the other direction.

I don’t know what made me stay there and actually be engaged in a conversation with him for quite a long time. Perhaps it was the bright street lamps that made me feel kinda safe. Or because he seemed sincere. Or because I remembered a friend once had told me that people were inherently nice, so be nice to people and they would be nice to you.

“Yes,” I heard myself answered. “I’m from Indonesia.”

A short conversation followed, since I had to explain where exactly Indonesia was (near the dot that’s called Singapore, north of Australia; Indonesia is where Bali is, if you know what Bali is anyway; I was a little bit sad my country was sort of unheard in this part of the world).

He said his name was Attila. I said my name in return.

I pointed at some sort of monuments behind the fence. “What’s that?”

“Some Bosniaks put it to commemorate their casualties in war. Then the Croats, of course, had to put their commemoration stone as well,” he answered, shrugging his shoulders. “I don’t understand why tourists always ask what’s this, what’s that, what’s everything. Why can’t you just walk like other people?”

I was surprised to hear the question. I never thought about it. “Well, tourists like me have gone a long way to get here. We don’t have as much time as you do to be spent here, so naturally we want to know as much as possible from that short trip,” I tried to answer.

I forgot how the conversation went, but then he told me about his background. He was from another part of the country, but moved to Mostar with his mother when his parents separated. “My father is a Serb and my mother is Bosniak. My mother always says my father is an asshole,” he laughed bitterly. “I’m not sure whether it’s true. Anyway, mixed marriage was common here. Some worked well, some didn’t.”

Yugoslavia was already falling apart when they moved, but there was no war yet in Bosnia-Herzegovina. As you may or may not know, the main three ethnic groups of Bosnia-Herzegovina are Bosniaks, Serbs, and Croats. They are all Slavic and they speak pretty much the same language, but due to their complicated historical trajectories, are classified into different ethnic groups based on their religions. The Serbs are Orthodox Christians, the Croats are Roman Catholics, while the Bosniaks are descendants of Serbs and Croats who converted to Islam during the Ottoman Empire times. Bosnia-Herzegovina was one of the six republics (plus two autonomous provinces) of the Socialist Federal Republic of Yugoslavia, which stayed intact only under Tito, then fell apart violently afterwards. Read more about the break up here and there.

“I did not know how it started, but suddenly war was here in Mostar. For years, the Croats stayed in the western side of the city, while we lived in the east side. We heard about the fall of the bridge but couldn’t see it with our own eyes, because it was behind the frontline,” he continued to tell his story. “Then the war was over. My friends and I crossed the line to go to the west side, but we got lost for hours because everything had changed. We didn’t dare to ask people around because they would know that we were not Croats,” he chuckled.

“So what do you consider yourself? Are you a Bosniak, a Serb, or…?” I asked.

“I don’t know. I don’t know what I am. I don’t even know what to do with my life. I don’t want to do anything anyway,” he sighed. “And it’s really hard to find jobs here. It’s even more difficult to date girls, because they want to get guys with jobs, guys who can provide for them.”

I don’t know whether that was really what he felt or actually a pick up line. But I took it as my cue to leave. He offered to take me back to my B&B. We walked together, still talking about lots of things I’ve already forgotten now (please excuse my memory deficiency). 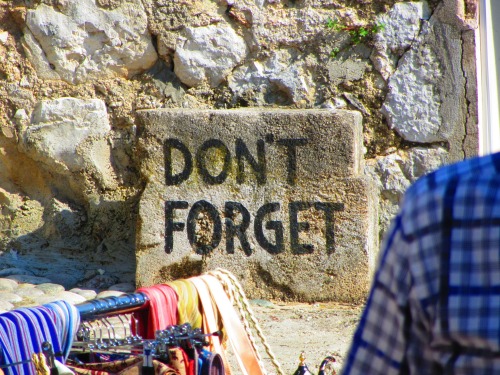 The day after, I told my airbnb host Teo about Attila. “I don’t think it’s his real name. It’s an old name, no one name their kids like that anymore,” he said, frowning.

After being occupied by the Ottoman Empire, Bosnia-Hercegovina was “transferred” into Austro-Hungarian Monarchy’s hands in late 19th century. Attila, after Attila the Hun, became a familiar name in Bosnia-Hercegovina after the Hungarians — who had been claiming to be descendants of Attila — migrated into the region following the take over.

Teo then told me his worries about the hardening of identities after the fall of Yugoslavia. “Remember my friend yesterday?” he asked, referring to a bunch of Mostar bestfriends he introduced to me the day before.

One of his friend had told me, after saying his name, that he was a moslem. “Why did he have to say that? We never say such thing before the war. We just said our names when we met new people,” he said.

Teo has a Bosniak — thus moslem — father and a Macedonian mother. I did not ask him what he would label himself (after all, despite my curiousity, it’s none of my business).

In a way, I think it is a pretty common phenomenon. We tend to cling to our identities to cope with insecurities. And how insecure can people be after a war is over? I have no idea, as I’ve never encountered any war before, but from what I’ve read and heard, we can be very, very insecure. And perhaps even more insecure once the war survivors migrated to other places.

A Serb friend — who stayed in Serbia during and after the war — once told me about his friend, another Serb who left the country in the beginning of the war. “She’s the most nationalistic Serb I’ve ever seen,” he sums his friend in a nutshell.

Then I could not help to think about my own identity, my own country. What will I call myself if Indonesia would be torn apart into smaller entities? I have a father from the Minang tribe, a Sundanese mother; I was born in Jakarta but was raised in Yogyakarta. I hope I can continue to label myself as an Indonesian.