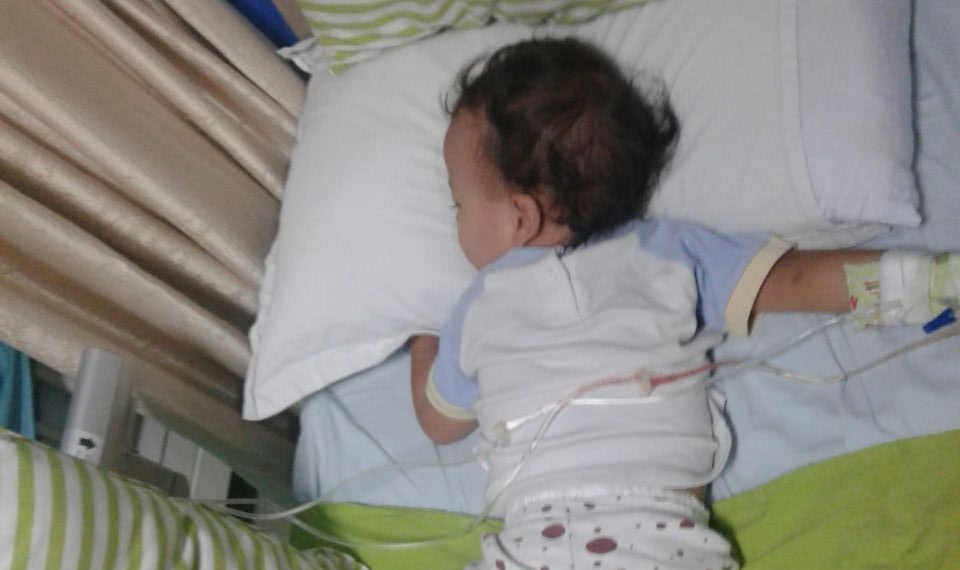 An episode of four nights in the hospital, and a much-awaited poo, four days later.

It began as a seemingly regular fever on Monday, two weeks ago. R’s body temperature rose to 39° C so we gave him liquid paracetamol to ease his pain. On Tuesday night, for the first time in his 2.5 years of life, R had seizures. His hands jerked three times for several seconds, so we knew that was no ordinary fever and decided to bring him to an hospital ER.

On our way, we tried to bring down R’s temperature by placing warm-watered towel on his forehead, armpits and thighs. R did not respond well when we tried to talk with him so I panicked and cried a lot. He’d been a talkative and active child so seeing him so quiet scared the shit out of me.

The toughest scene was seeing R struggle against the nurse (and my husband, who held R tight) when an infusion needle must be attached to his back of hand. Of course I cried again. However, being infused was a must for R, as he refused to drink and eat, while he needed a lot of water and nutrition intake. (By the way he used the yellow infusion needle, similar with Setya Novanto’s :D)

We checked in to the patient room. The day after, a paeditrician paid a visit and read R’s lab results. The diagnosis was upper respiratory infection caused by virus, which is pretty common for toddlers.

Next came four days and nights of waking R up for medication, daily blood lab tests, trying to persuade him to drink and eat, calming him down when he cried whenever nurses/doctor/cleaning service staff/anyone entered the room, and praying, praying for him to get well soon. I stayed two nights with him and Yoga stayed for the next two nights, although both of us were always there during the day.

R did get better in the third day, talking much while watching Youtube videos, but on his fourth day he became quiet again. The fever rose and fell and rose again. The paeditrician told us that she would only allow R to go home 24 hours after his temperature went below 37.5°C. In the fourth day, his blood test result showed us that his thrombocyte count plummeted.

We were really worried. We consulted with several friends who were doctors (thanks Lucy, Katrin and Edo!) and they told me that it is normal to have thrombocyte down when one is infected. The count should rise in line with R’s recovery. And it did: R’s thrombocyte count increased in the fifth day. His fever was also gone.

On Saturday night we were released from the hospital but R must come back for blood test on Sunday. So we came back. The result was better than Saturday’s. We were told to return to do another test on Monday and consult it with the paeditrician, so we did. The result was again better than Sunday’s blood test. We did not meet the paeditrician though, since she was already two hours late.

R kept taking his medications (the hospital provided us quite a lot of these) afterwards, and his appetite returned so we were optimistic for his recovery. One thing that was much awaited — as all parents might know because it’s one thing that we’re obsessed about beside milk and sleep — was his poo.

R did not eat much in his days in the hospital so we thought it would be ok if he did not defecate for four days. We did ask the paeditrician for medication to relieve R of this matter and she prescribed a laxative, which we gave to R on Sunday.

It did not seem to have any effect on Sunday so we gave R more water and fruit to hopefully influence his bowel movement. We waited and we waited. We also consulted with Lucy and Katrin again (thanks again!).

On Wednesday morning, Yoga and I decided that if R could not defecate that day, we would have to visit the paeditrician or hospital again. Alhamdulillah, around noon the good news came. Yes, he pooped!

So we can officially end this worrisome episode of life. Yay!

This epsiode is of course, fortunately, considerably easy compared with other parents who must deal with more challenging days, months, or years in hospitals. Our hearts are with you.