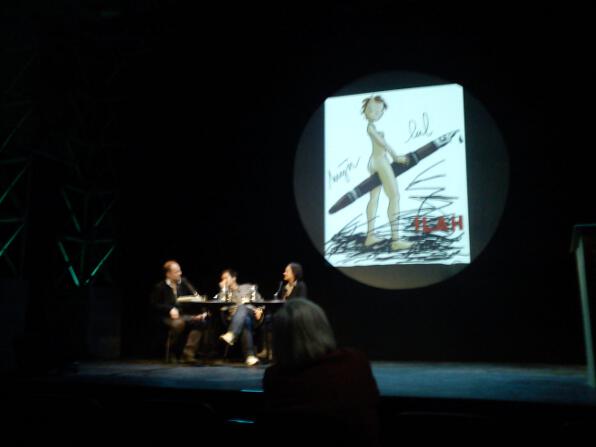 The ticket price was pretty steep — 13.75 euro and it was student price, the full price was 25 euro! It’s worth the price, though, because there were various programmes simultaneously held in six venues in Theater Aan Het Spui and Filmhuis. However not every session is in English — I wasn’t aware of that and went into the Treasure Hunters without understanding a word of it.

After the misadventure, I was back in the right track and entered the Kleine Zaal for Comics and Taboos program. The discussion was about how comic artists Inge Heremans and Peter Milligan portrayed sexuality, which was (and still is) perceived as a taboo, in their works.

Heremans is a Belgian whose comic strip character, Cordelia, was published for several years in De Morgen. “De Morgen is one of the best [Flemish] daily newspaper in Belgium,” said comic strip reviewer Peter Breedveld who acted as the moderator in the discussion. “It was,” Heremans objected, “It isn’t anymore. They fired me.” Breedveld, who expressed his surprise, tried to dig why she was fired, was it because her strips were too sexually explicit? Heremans replied, “I don’t think so. I never get any hate mails because of explicit contents.”

Pen is her weapon.

Except one occasion, she said, when she made posters for a book event with various poses of Cordelia reading books. Apparently, depicting sexual images in a national newspaper is okay for Belgians, perhaps because its target audience is adults, while in the book fair many children tag along with their parents. People protested and the Cordelia posters were taken off the book fair premises. 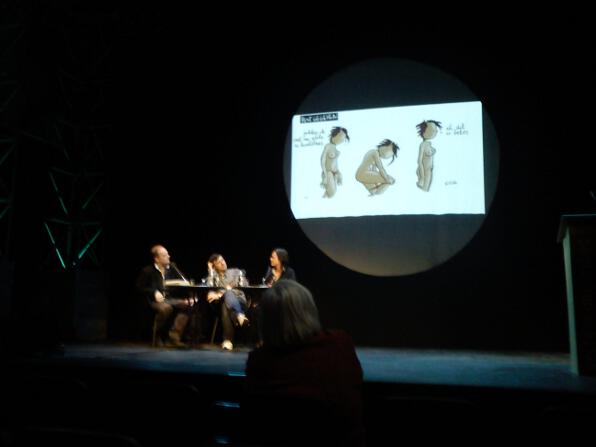 Taking off clothes. "Ah, this is better."

Meanwhile, Milligan is one of the artists of the British invasion to USA’s comic scene. Using the wry, sarcastic, British humour, he answered Breedveld’s interrogation on his works.

One of his most controversial comics is Skin, telling a story of a thalidomide skinhead Londoner in the 1970s, who tries hard to deal with his birth defect, identity, and sexual needs. Deemed as a disturbing story, Skin was rejected by its original publisher-to-be. “I think it was more because of it tells a story about a disabled boy who is from a working-class family than its sexual content,” Milligan said with a smirk. Skin was finally published by Tundra in 1992.

Milligan also wrote Enigma, a surreal comic series which features characters dealing with homosexuality; as well X-Force and X-Statix, a twist of superhero clichés: “his team are ego heavy celebrities who argue amongst themselves whilst being manipulated by their agents and the media (the missions are all televised).”

Raised with comic books, mostly Japanese manga, I really love comics (my undergrad thesis was even about comic books readers) although am not an expert of it. So I’m really happy to be lucky enough to attend this session.. ðŸ˜€

The next discussion, Forgive or Forget, was also interesting. Featuring Leila S Chudori (Indonesia), Kopano Matlwa (South Africa) and Adriaan van Dis (The Netherlands), the session went through on the issue of post-colonial identities and problems. Very much development studies/ISS-related, hahaha.

Chudori talked about characters in her short stories anthology 9 Dari Nadira (9 From Nadira), which were affected by the historical trajectories of Indonesia. The young and talented medical doctor-to-be Matlwa tackled questions on her debut novel, Coconut, its namesake derived from a South African insult to those who are “black on the outside but white on the inside.” In contrast, the Indo (Bahasa Indonesia for people of mixed Caucasian-Indonesian descendants) Van Dis, who had written several novels on colonial/post-colonial issues, was perhaps the other way around: a white guy who is black (or at least coloured) in the inside. 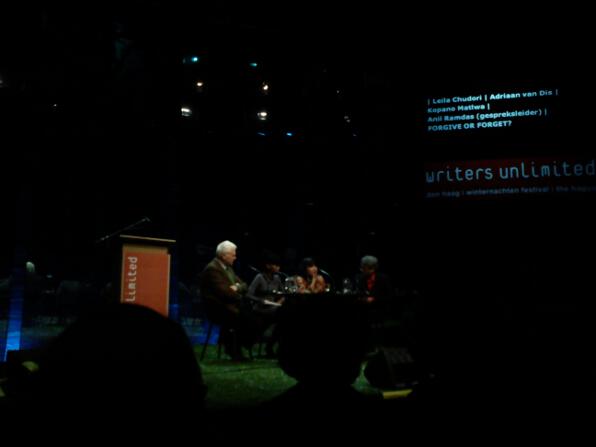 To forgive or to forget, that is not the question.

Last but not least was the Jungle by Night‘s amazing performance at the end of the night. They. Are. AWESOME! Those nine young boys from Amsterdam played great Afrobeat/ethnojazz rhythm and rocked the floor. Another form of hybridity: white guys playing Afrobeat. Ha. They’re so young “they don’t even have facial hair yet!” as Thandi said. Oh have I told you they’re Dutch? It’s practically the first time I saw cute Dutch boys. And they really enjoyed playing the music, you can tell it from their gestures. 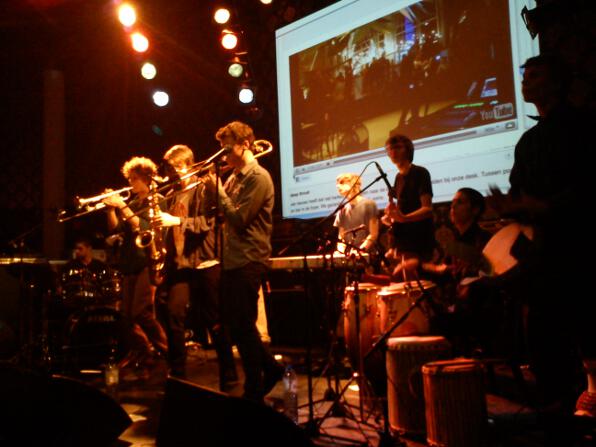 Lost in the jungle

I went back to the dorm cycling with a smile on my face, the happiness blew the freezing wind away.